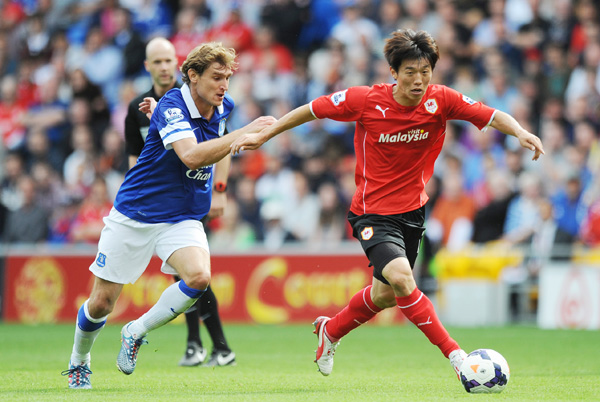 Ki Sung-yueng signed a year-long loan with Sunderland, the Black Cats announced on its Web site, ending a guessing game regarding the beleaguered Korean football star’s next destination.

The official Web site of Sunderland said on Saturday that the Swansea City midfielder became its 11th summer signing through a season-long loan. Ki was rumored to have been looking for a new team after an alleged feud with Swansea manager Michael Laudrup.

The 24-year-old took a public bashing in Korea and received a warning from the Korea Football Association after he criticized former national football team coach Choi Kang-hee over his limited playing time with the national team on his “secret” Facebook page. He hasn’t been in the starting lineup at Swansea since the 2013-14 Premier League season started.

Ki will be welcomed by his national teammate Ji, a 22-year-old striker, who is struggling to play impressively at Sunderland. Ji started in the team’s second league match on Saturday, but watched Sunderland lose, 3-1, to newcomer Crystal Palace.

Kevin Mirallas came closest to giving Everton its first win of the season but wasted two good chances, while David Marshall saved a deflected header from Nikica Jelavic. The visitors also unsuccessfully appealed for a penalty in the first half at Cardiff City Stadium for a challenge on defender Leighton Baines.

Fraizer Campbell, who scored two goals for Cardiff in the 3-2 win over Manchester City last week, was largely quiet, and he mistakenly broke up what could have been his team’s best chance when he intercepted a throughball meant for Peter Whittingham.

Everton’s first three matches of the season have ended in draws.

In London, Manchester City avoided another blip against a Premier League newcomer on Saturday, although without coming close to replicating the scintillating performance from its opening match of the season.

After starting the season with an electrifying 4-0 rout of Newcastle, City lost at Cardiff last weekend to drop points early in its bid to reclaim the title from Manchester United.

United is in action at Liverpool on Sunday when Arsenal hosts Tottenham in the north London derby.

At the Etihad Stadium, City labored against a resilient Hull side until Negredo, an offseason signing from Sevilla, came off the bench to head in Pablo Zabaleta’s cross in the 64th minute.

Yaya Toure put the victory beyond doubt in the 90th minute when he curled in a free kick after Samir Nasri was fouled.

“We must improve,’’ City manager Manuel Pellegrini said. “We had too many difficulties in the first half [in creating chances] to shoot at the Hull goal.