It’s never too early for a palace concert

It’s never too early for a palace concert 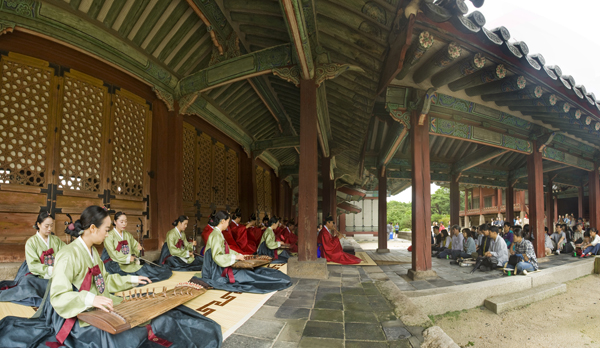 Waking up early on a Saturday morning and attending a concert at 7 o’clock may sound like a wildly absurd idea to office workers who value sleeping in on weekend mornings.

However, the breeze in the morning and at night has gotten cool enough, which means some early birds may find the idea attractive after all.

Plus if the concert is being held in serene, peaceful gardens at a centuries-old palace in the heart of Seoul, which is normally off-limits to the public in those hours, some people may flock to attend the concert. (Most Korean palaces do not open until 9 a.m., no matter what month of the year.)

The National Gugak Center organized the program in 2008 and since then it has been held at 7:30 a.m. on certain Saturdays between mid-August and mid-September every year. Officials of the center said that every year, tickets are sold out and there are hard-core fans who come every year.

On the JoongAng Ilbo’s recent visit to the concert, about 500 people - men and women, young and old - were sitting on mats in the backyard of Myeongjeongjeon, one of the structures at Changgyeong Palace, at 7 in the morning.

A child rested his head on his mother’s lap. A family brought fruits in a bag and shared them. An old man was fanning himself and examined the palace with emotional eyes. He said, “This is the first time I came here since its Changgyeongwon times. Finally, it looks like a palace of a dynasty.”

During Japanese colonization (1910-45), the Japanese transformed the Korean palace in Jongno, Seoul, into an entertainment area with a zoo and other attractions. They eventually began calling it a garden instead of a palace, demoting the site’s status.

“Myeongjeong means upright politics,” said Ha Ju-yong, the vice president of Seoul Institute of the Arts, explaining the name of the structure where the concert was taking place. “Here I wish you enjoy neat music and beat the heat.” Ha was in charge of commentary and he explained the music people were about the listen to as well as the musicians.

“The first song you will listen to is gagok, a classical Korean song, with instrumental music. In today’s concept, I guess you can imagine how songs become alive with strong bands,” he explained.

Left: Crown Prince Yeongchin (1897-1970) visits the zoo in Changgyeong on April 26, 1922, with his Japanese wife, Lee Bang-ja. Right: Animals at Changgyeong during its years as a theme park. [JoongAng Ilbo]

Gagok is a mixture of emotional and poetic lyrics accompanied by classical instruments. It embodies a spirit that is unique to Koreans, but the genre began to disappear in the mid-20th century due to the influx of Western music.

Lee Jeong-gyu, a male singer, and Lee Jun-a, a female singer, sang heavy, yet clear and soft gagok, along the instrumental music played by seven musicians at the National Gugak Center. Their voices - delightful yet not too amusing, sad but not too tragic - resonated through the wooden structures of the palace.

The second part of the concert included dancing such as chunaengmu, a type of court dance that was presented to the Korean kings at royal ceremonies. It seeks to express the movements of a nightingale singing on a tree branch on a spring morning.

“A dancer wears 13 layers of clothes and dances only on a mat that is the size of just a few sitting cushions stuck together. So it is a very difficult dance,” Ha said. “You shouldn’t move your shoulders too much. You shouldn’t smile too much. Grace is important. It is all about refrained yet elegant moves.”

Next, Won Wan-cheol, a professional daegeum player, performed. Daegeum is a Korean wind instrument that looks like a flute and is made of bamboo. The sounds were racing and strolling, fast and slow and pushing and pulling. When the music finished, a man shouted “Eolssigu,” which is a rough Korean equivalent of “Bravo.”

The finale was an 18-person traditional string orchestra, where all participating musicians appeared on stage and gave a performance that centered on geomungo, a six-stringed zither made of oak. It was a performance good enough to be presented to the kings and it felt strange that today anybody can enjoy it.

After the concert was over, those that wished were given a chance to take a walk around the palace with a guide. Although for decades the Changgyeong Palace was demoted to an entertainment facility, even during those years the palace was close to the Korean people. And with the concert, it’s proven that it still is.