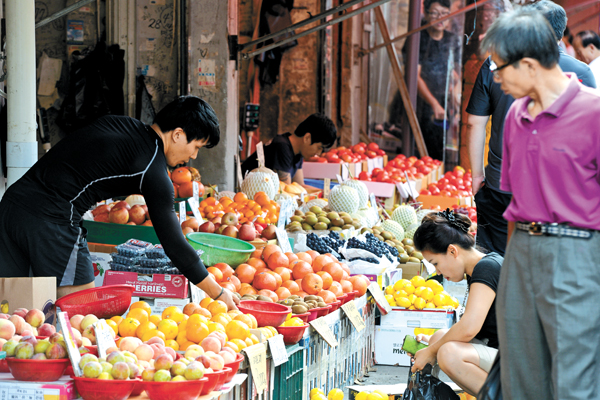 Shoppers browse through fruit yesterday at Gyeongdong Market in Dongdaemun. The government estimates the cost will be 185,000 won (168 dollar) this year for the ritual table for the memorial service for ancestors on Chuseok. [NEWS1]

Two weeks ahead of Chuseok, the nation’s largest holiday, the government is on alert to keep consumer prices in check and worried about the impact of spikes in the cost of agricultural products the past month due to the summer’s heat wave and torrential rain.

According to Statistics Korea yesterday, consumer prices overall rose 1.3 percent in August from a year earlier, staying in the 1 percent range for the 10th consecutive month.

Even though the government is comfortable with the stable growth trend, it feels a sense of urgency about the need for pre-emptive measures to stave off further increases as Chuseok approaches.

In addition to the effect of the summer weather, the government also worries about rising oil prices in the wake of geopolitical conflicts in the Middle East.

In an attempt to help hold the line on prices, local governments are aligning their efforts with those of the central government.

The Jeju Provincial Government said yesterday it will monitor prices of 32 items and services through Sept. 22.

Nonghyup said it will release an additional 50,000 tons of apples and Asian pears from Friday through Sept. 17 to help maintain prices of the two major fruits consumed during Chuseok.

Nonghyup’s retail unit also will sell apples and pears at a 10 percent discount, or 48,000 won for a 6-kilogram box.

The Blue House will hold a cabinet meeting on Chuseok prices today.

Despite the higher prices, many Koreans plan to give fruit sets as gifts for relatives.

Lotte Mart said yesterday that it survey 1,220 customers and 20 percent said they would give fruit, followed by health supplements, canned food and body cleansers.

According to market researcher Nielsen, more and more Koreans have been choosing food over non-food items as Chuseok presents over the past three years.

The Lotte Mart survey also found the average spending on Chuseok gifts is estimated to be 196,000 won this year, down 7.4 percent from last year.

According to a survey by aT, the state-run agricultural, fisheries and food distributor, the average cost for making a table for the ancestral ritual service is estimated to be 185,000 won this year, slightly up from 184,000 won last year.