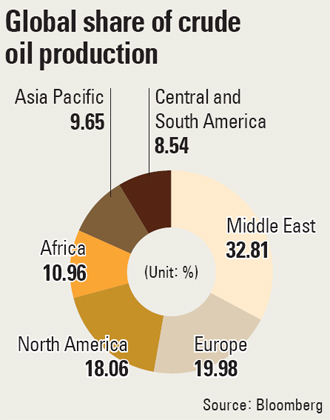 Though international oil prices fell slightly last week after reports that military action against Syria is most likely not imminent, concerns are still rising at home and abroad over lingering uncertainty and political tension that could send prices up again.

When the United States declared war on Iraq, international oil prices skyrocketed and had a huge impact on the global economy, including that of Korea.

According to the Oil Research and Information Center at the Korea National Oil Corporation, the price of West Texas Intermediate crude for October delivery was $107.65 per barrel, down $1.15 from the previous day. The price of Brent crude for October settlement also dropped $1.15 over the same period to $114.01 per barrel.

The fall came as concerns eased in the market that a possible military strike on Syria to punish President Bashar al-Assad’s regime for chemical weapons attacks is not imminent.

However, with uncertainty still prevalent in the region and the continuing possibility of a military clash in the Middle East, concerns are growing that international oil prices could surge.

The Financial Times wrote last week that “the parallels between the Syrian crisis today and the run-up to the Iraq War back in 2003 are almost spooky” and that “all the familiar elements seem to be there.”

Although the Obama administration has said that any strike against Syria would not lead to protracted involvement in the strife-torn country, analysts note that if the U.S. role escalates, international oil prices would skyrocket.

Analysts from the France-based investment bank Societe Generale predicted the price of Brent crude could eventually surge up to $125 per barrel, and if military action against Syria affects other oil production in the region, the price could go as high as $150 a barrel.

It should be noted, though, that the amount of crude oil production in Syria isn’t large, amounting to 70,000 barrels a day. The problem, however, is that the Middle East is the source of 33 percent of the world’s crude oil. Syria is close to Saudi Arabia, the world’s No. 1 oil producer.

Tony Nunan, a risk manager at Mitsubishi Corporation, said in an interview with Reuters, “There are so many other parties involved when it comes to Syria.”

“Israel, Iran are close by and other countries could get dragged into it,” Nunan said, hinting that if the United States decides to attack Syria, then there will be increased political uncertainty in the region and the oil supply could worsen.