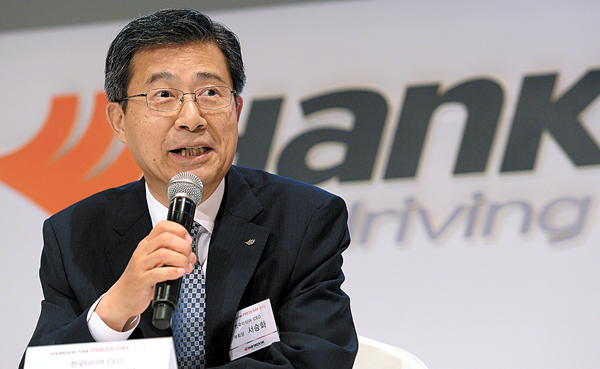 Hankook Tire, the nation’s largest tire manufacturer, said yesterday it has been selected by Daimler AG as the original equipment supplier for the new Mercedes-Benz S-Class, the flagship sedan of the luxury German automaker, providing another platform for the company’s drive to become a global top-tier brand.

“The deal proves that our product quality has been recognized in the world,” Hankook Tire Vice Chairman and CEO Suh Seung-hwa said at a press conference yesterday in Seoul. “We are not top-tier yet, but we will steadily pursue our vision to become a leading global tire maker by 2020.”

The latest contract supplying a customized version of its Ventus Prime tires to the S-Class highlights the company’s portfolio of OE supplies (tires used in factories) to premium brands. Hankook has been supplying Audi since 2006 and BMW since 2011.

The company also has been providing OE tires to Toyota, Honda and Nissan. It recently sealed a deal to supply OE tires for the Nissan Altima and Toyota Corolla.

Hankook, which now sits at No. 7 in global rankings, also revealed its strategy to boost globalization of its brand, which includes the strengthening of global supply chain management, compliance with global technology standards, expanding the distribution network and raising the brand’s profile.

“Economy of scale matters in the tire industry,” said Cho Hyun-bum, the company’s chief marketing officer and chief corporate management officer. “Currently, we have a production capacity of 92 million to 93 million units, but we hope to increase that by 5 million or 6 million a year.”

Hankook said it will expand production capacity in its existing plants in Indonesia and Chongquing, China, and it plans to build a plant in the United States. Tennessee, South Carolina and Georgia are the states under consideration.

“The location of a new plant will be confirmed at the end of this year,” said Cho Hyun-Shick, president and CEO of Hankook Tire Worldwide. “Our plan is to build a plant that can steadily increase its annual production by 5 million to 10 million units.”

The company also revealed that it aims to expand its Hankook Masters distribution network of more than 4,400 shops worldwide by 7,700 locations by 2017.