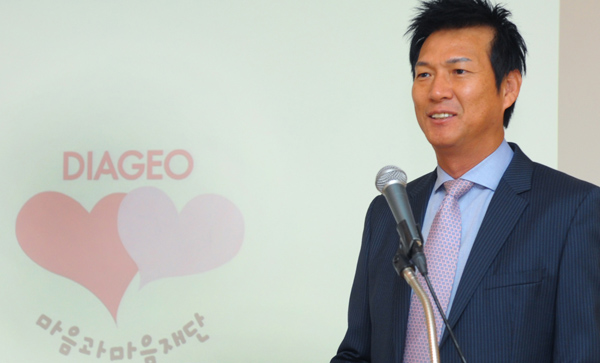 Cho Kil-soo, managing director of Diageo Korea, the nation’s largest whiskey importer, said yesterday he will strengthen product lines of vodka and imported beer, popular among young people, to compensate for a downturn in the whiskey market.

Cho, who joined Diageo Korea, part of Diageo Group, in July, talked about plans for the company and announced the launch of a charity foundation yesterday at Lotte Hotel, Sogong-dong, central Seoul.

“We plan to reduce our reliance on Windsor, which is 70 percent to 80 percent of revenues, to 50 percent, and expand other products. We will continue to challenge and innovate to maintain our reputation in a rapidly changing liquor market,” said Cho.

“Although we face internal and external challenges, I believe the company will be able to overcome the hard times if we prioritize the things we can do and continue to invest with faith,” said Cho.

“In order to lead the market by maximizing challenges and opportunities, the company should have three aspects: transparency of communication, social responsibility and new growth engines,” he said.

“In addition, we must create a business model that meets the needs of customers, struggles to create values for consumers and customers, and commits to social responsibility.”

The liquor company said it will provide 1 billion won ($910 million) over the next five years to the Ministry of Gender Equality and Family after launching the Hearts and Minds Foundation, dedicated to supporting vulnerable women through housing assistance, a job center to encourage financial independence, family counseling and education.