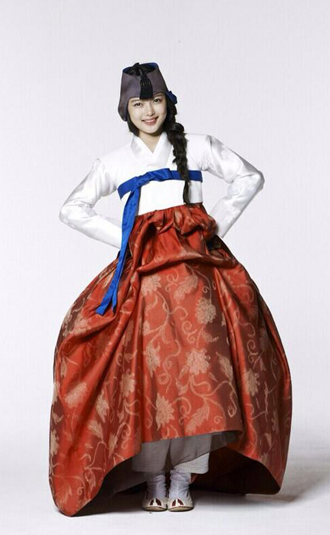 Kim Yoo-jung, the 14-year-old star of MBC drama “The Moon Embracing the Sun,” said she is not going to start dating until she turns 20.

“I’m not so jealous [of other couples],” she said on cable channel QTV’s “I’m Read Kim Yoo-jung in LA” yesterday, after spotting a couple on a date during the filming of the episode.

“I think I’ll be dating someone when I’m 20, and the relationship will be secret.”

She also said that she hopes to grow taller and become prettier.

“I want to be active in taking roles in many different works, and I hope to build some good friendships with Hollywood stars,” she said.

Meanwhile, over on Kim’s Twitter account, she released images of herself in a hanbok, the traditional Korean outfit.

“Are you all preparing to welcome the Chuseok holiday?” she wrote. “I’m saying hi to you, for the first time in a long time, wearing a hanbok.”

Kim used to wear hanbok all the time when she acted in period drama “The Moon Embracing the Sun” last year.

She added that the photo was taken during a promotional photo shoot.