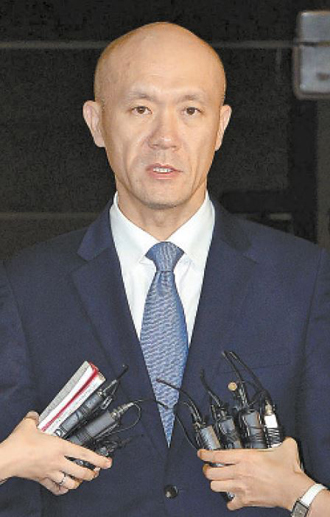 Chun Jae-yong talks to reporters in the wee hours yesterday after being questioned for 18 hours at the Seoul Central District Prosecutors’ Office.[NEWSIS]

Former president Chun Doo Hwan’s son reportedly told prosecutors during an 18-hour grilling that his family intends to pay hundreds of millions of dollars in a criminal fine owed by his father.

Chun Jae-yong, the second son of the former military strongman, appeared at the Seoul Central District Prosecutors’ Office at 7:30 a.m. Tuesday and was questioned all day over allegations that he evaded paying a gift tax amounting to 5.9 billion won ($5.4 million) on a real estate transaction that allegedly used hidden wealth of the former president.

The 49-year-old son talked to a throng of reporters as he left the prosecutors’ office at 1:44 a.m. yesterday, saying the family “will address [the issue of paying the fine] once we reach a decision.”

A grim-faced Chun, dressed in a business suit, also apologized to the public “for having caused concern.”

Facing an unprecedented prosecutorial pursuit of Chun’s hidden wealth, his family is reportedly planning to make a payment of around 100 billion won toward the 167.2 billion won Chun owes. The fine was imposed by the Supreme Court in 1997 for Chun’s conviction for taking bribes and running slush funds during his seven-year presidency in the 1980s.

Second son Jae-yong is being investigated for the purchase of a 460,000-square-meter (113.7-acre) plot of land in Osan, Gyeonggi, from his now-jailed uncle, Lee Chang-seok, a younger brother of former first lady Lee Soon-ja, for 2.8 billion won in 2006.

The amount was one tenth the assessed value of the property.

Jae-yong’s grilling was the first time of a child of Chun, who has three sons and one daughter. Thanks to the so-called Chun Doo Hwan Act passed in June by the National Assembly, the government is able to confiscate assets not only of the former president but also his family members or associates who acquired wealth from Chun and knew it came from illegal sources.

Lee Chang-seok was put into custody on Aug. 19 on tax evasion charges and a 15 billion won property owned by Chun Jae-kook, Chun’s first son, was seized by authorities.

Jae-kook is also expected to be summoned by prosecutors to be questioned for any involvement in managing his father’s assets in coming days.

Meanwhile, Roh Tae-woo, Chun’s successor, paid off the balance of his 1997 fine of 262.8 billion won yesterday. Roh Jae-woo, the former president’s younger brother, paid the 15 billion won balance by wiring the money to a bank account belonging to the Seoul Central District Prosecutors’ Office. Roh, 80, governed the country from 1988-93 and was the first directly-elected president after the dictatorships of Park Chung Hee and Chun.

Chun’s original fine was 220.5 billion won in fines and he has an outstanding balance of 167.2 billion won.

He claimed in the past to have no money to pay the balance.