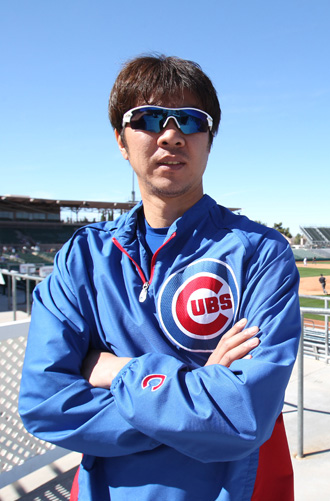 As brief a stint as he may have there, Lim Chang-yong can now be called a major leaguer. Lim was added to the Chicago Cubs 40-man roster on Wednesday, making him the 14th Korean - and the 12th Korean pitcher - to play in the big leagues. At 37, he is the oldest.

With the Triple-A affiliate, Iowa, Lim pitched eleven and one-third innings in 11 games, during which he allowed one run while striking out 12. His ERA was 0.79.

Lim might have a Korean duel with Cincinnati Reds slugger Choo Shin-soo as early as this month when the Cubs meet the Reds. He will also join Ryu Hyun-jin in the big leagues, where the Los Angeles Dodgers starter is the only active major-league pitcher from Korea.

Lim is the fourth Korean to play in all of the three leagues in the U.S., Japan and Korea, after Lee Sang-hoon, Koo Dae-sung and Park Chan-ho, all pitchers. Koo, who was a Hanwha Eagles ace, was 36 when he debuted for the New York Mets in 2005.

Lim expressed his excitement about the promotion to MLB.

“I want to see how it feels like,” Lim said, according to the Cubs’ Web site. “I’m nervous and excited.”

He may open his big-league career with much less attention than many other Koreans, but his unbent spirit of challenge despite his age sets him apart from his younger peers.

After sustaining an elbow injury in July 2012, Lim, then pitching for the Tokyo Yakult Swallows, signed with the Cubs at a tenth of his salary in Japan.

The former Samsung Lions reliever, who was a star in Korea, also embraced the pay cut when he moved to Japan in 2008. After joining Nippon Professional Baseball, he quickly built a reputation as a reliable reliever, recording 128 saves and a 2.09 ERA in five years.

He earned the nickname “Mister Zero” after recording 20 straight shutout innings for the Swallows in 2009. In his 13-year career in the Korea Baseball Organization, Lim recorded a 3.25 ERA in 534 appearances, including 128 starts, and had a record of 104-66.

After signing a minor league deal with the Cubs in December with a conditional call-up to the major leagues, Lim entered a months-long rehabilitation program to recover from Tommy John ligament replacement surgery. He joined a rookie league in late June and pitched his way up, showing nearly the same star qualities he did in Korea and Japan.

Lim pitched twenty-two and one-third innings in 21 minor league games in total - and started five of them - with an ERA of 1.61. He allowed no home runs and gave up four earned runs while striking out 24.

Cubs manager Dale Sveum introduced him as “Zero” on the Cubs’ Web site.

“He’s coming back from a couple injuries and has been pitching well for us in the minor leagues. He’ll come up here, and we’ll see what we’ve got,” Sveum said.

Lim helped Korea to finish as the runner-up in the 2009 World Baseball Classic. He was also a member of the bronze medalists of the 2000 Sydney Olympics.