‘Sensation’ a unifying vision in white

‘Sensation’ a unifying vision in white 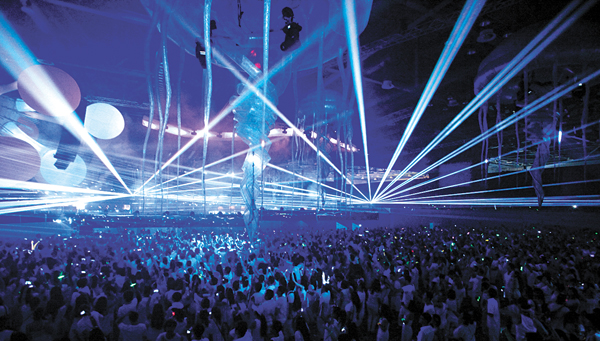 On a Saturday night in July 2012, about 20,000 young Koreans dressed in white from head to toe swarmed into Kintex, an exhibition center in Ilsan, Gyeonggi. The scene was peculiar because the location is hardly a weekend hot spot for young Koreans, but rather a venue that usually holds baby fairs or tech-related expos during the week.

The young Koreans “in their best white clothes, looking all shiny” were there to enjoy the first edition of “Heineken presents Sensation Korea,” a Cirque du Soleil-esque show accompanied by electronic dance music. Despite being in its first year, the show received positive reviews for being one of a kind.

This show is returning to Korea, but this time in November, with the theme “Wicked Wonderland.”

“Sensation” was created in Amsterdam, the Netherlands, in 2000 by two brothers, Duncan and Miles Stutterheim. The event was born in 2001 - a spectacle show that combines dance and music, where guests follow a strict all-white dress code that is meant to celebrate the life of Miles Stutterheim, who died in 2001.

Despite the event’s uniqueness, many Koreans perceive it as yet another music festival that’s flourished in the country over the past several years. However, Thom Bartelse, marketing manager of ID&T, the organizer of Sensation, explains that the event is like no other.

“At Sensation, we deliver an experience. We don’t consider ourself a festival but a theater show with very good music,” said Bartelse. “The main reason that we are here is because we want to unite and have everyone dance in white across the world in every continent. We want to show what good music is and how you can deliver that in different packages with a lot of theater and, of course, fireworks.”

The Korea JoongAng Daily recently interviewed Bartelse to hear more about the unique show. Here are some excerpts. 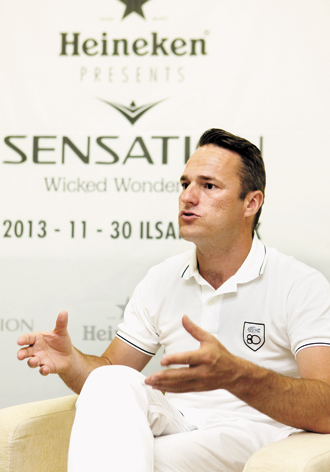 Q. This year’s theme is “Wicked Wonderland.” Tell us about it.

A. It is based on “Alice in Wonderland,” but it’s a grown-up’s fairy tale. We’ve split up the fairy tale into five acts that we want to tell during the night. Our main character, you could call her the naughty sister of Alice, goes on a journey of liberation together with our guests all through the night. The journey starts in front of a white door, which is on a visual screen on the center stage. And basically, she looks at the crowd and says, “Shall we open the door? I’ll see what happens,” and the door opens and the show starts. You can imagine butterflies spreading their wings over the crowd. There are humongous acrobatic acts on the stage throughout the different acts. Every act is opened by a different door, and it symbolizes different stages in the search of liberation. You could go wrong or right, and you question, “What path am I going to take?” It all ends with everyone coming back on the stage at the end for one big group hug and the party is over.

Although you don’t call Sensation a festival, some Koreans may perceive it as another music festival held indoors instead of outdoors, with one stage instead of many, in November instead of the summer. What can you say the major difference is?

First of all, it’s good news that the Korean music and dance scene is exploding. It means that it’s growing, which is good. It means that people are embracing it and are willing to be part of it. Now, there is a big difference between music festivals and what we do. Festivals are a daytime experience and something that you experience together with friends, outside. At the end of the day, you go home. What we deliver is a completely different story.

First of all, we do a night show. We bring the biggest club on earth. Because we have to keep the people dancing in the same room for long hours - that’s seven hours at most - it’s quite different. At a festival, you can walk around. Moreover, with us, the positive experience you experience with us is all night long. You are experiencing a feeling of unity. You are experiencing the theater, you are experiencing the acrobats, the fireworks and the center stage. With the fact that this scene is really developing in Korea, I think Koreans will really appreciate the difference. They’ll really understand the difference, but if not, it doesn’t matter. I just want them to have a good night.

I think Sensation is unique as it’s a theater show and also a dance event with music. There are fireworks, acrobats and you say it’s the whole experience. But it seems like there is so much going on.

Music is also very difficult to combine. We have to be careful with what we deliver because it’s a theater show. Usually in a theater show, you sit on a chair to watch what’s happening. So we have to be careful to keep that balance that people will appreciate and dance. Every year we change and find new strategy. This year, we change the music strategy. The music strategy is now in a way that every artist fits in the experience of that moment in the act of the “Wicked Wonderland.” So there’s progression in the night of music. So there’s balance.

Sensation has been introduced to more than 30 countries. Is there any difference between the Korean version of Sensation and other Sensations?

Lastly, what do you want to say to Koreans who will be anticipating the show?

I always tell everyone I know: Be there on time because it’s a show. You are never late for a musical. Of course, it’s not mandatory. We are not going to shoot you if you are late or not allow you in until the second act, but if you want to have a full “Sensation” experience, come on time.