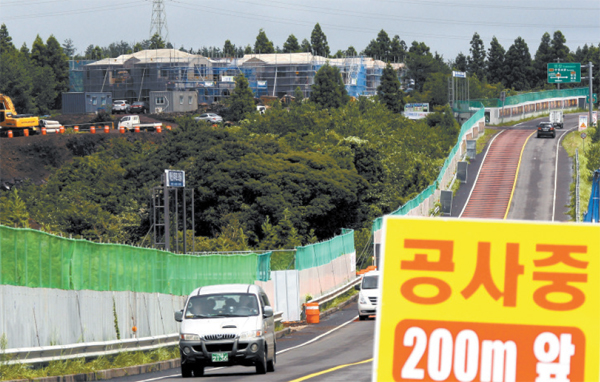 Construction of a resort by China-based real estate developer Baitong Group is underway on the side of Mount Halla on Jeju Island. Development projects by Chinese developers have triggered environmental concerns. By Oh Jong-chan

A tourist resort is being built by Baitong Group, a Chinese real estate developer. A slab of unfinished residential units sits next to a large excavator digging into the hillside.

The resort, scheduled for completion in 2016, wants to tap into the large influx of Chinese tourists to the scenic island. Chinese accounted for 1.08 million of Jeju’s 1.68 million foreign visitors last year.

But environmental groups and some Jeju residents are against the building of the resort halfway up Jeju’s iconic mountain. The massive scale of the project - 897,000 square meters (9.7 million square feet) - means that more than 19,000 trees will be lost. And there are claims that the quality of the groundwater will be affected.

“The important role of the mid-mountain area is to facilitate the supply of groundwater, which is later used as drinking water for Jeju residents,” said Hyun Hae-nam, a biological resources professor at Jeju National University.

“It would be very worrisome if the runoff coming from the construction site contaminates groundwater.”

Below the incomplete resort at 255?360 meters above sea level is a 1 trillion won ($915 million) Jeju Healthcare Town project under construction at 230 meters above sea level. It is being built by the Greenland Group, a Shanghai-based property developer, and it will offer recreational and cultural facilities, a medical research and development center and accommodations on a 778,000-square-meter plot.

Environment organizations are warning that a series of large developments will be a blot on Jeju’s scenic landscape. 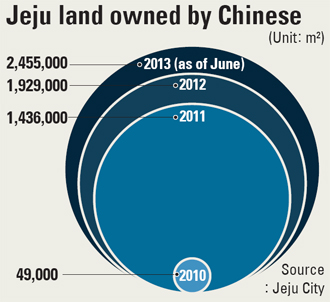 “The development on the hillside will seriously obstruct the scenic view and hurt the local ecosystem,” said the Korea Foundation for Environmental Movement of Jeju in April.

The group also expressed concerns about endangered species in the area.

“The region used to be a habitat for several protected or endangered species, including cuckoos, a type of ground thrush and local Redstart. “Some level of effect is inevitable,” the group said.

Despite such concerns, the island is going all out to attract foreign investment and cashing in on its growing appeal to Chinese. Jeju says that a series of development projects led by Chinese companies will lead to an increase in the number of Chinese visitors, as well as more construction jobs for locals.

Having been designated as a Biosphere Reserve in 2002 and part of UNESCO’s World Natural Heritage in 2007, Jeju was ranked among the top three overseas resort islands, along with Hawaii and the Maldives, in a 2010 survey by China’s Global Times. In 2012, China’s Travel Weekly ranked it the top honeymoon destination. 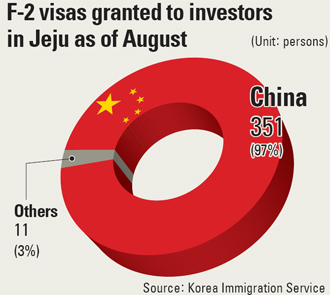 The granting of special F-2 visas for investors in property has boosted the island’s appeal. More than 100 Chinese have recently signed deals with Jeju developers to buy vacation condominiums and they are eligible for the long-term visas.

The city also fostered ties with Chinese travel agency Kanghui this year to promote tourism and opened a tourism office in Beijing.

But skeptics played down the economic boom being brought by the Chinese developers and visitors.

“Chinese builders are known to employ their own nationals after building resort complexes abroad,” said Oh Sang-hoon, a tourism management professor at the Jeju National University.