As rupee falls, Apple holds line on prices in India

As rupee falls, Apple holds line on prices in India 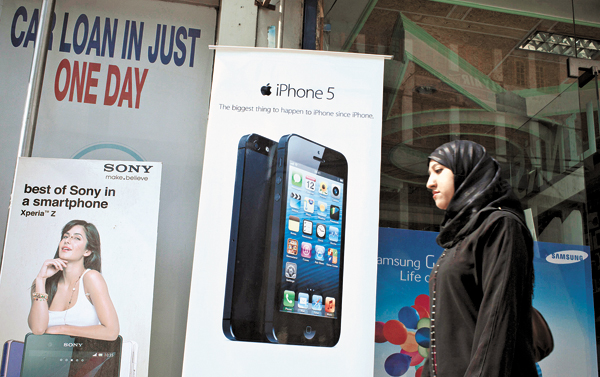 A woman walks past advertisements for Apple’s iPhone 5 displayed in the window of a store in Srinagar, India on May 13. [BLOOMBERG]

The Cupertino, California-based company has refrained from following Samsung Electronics in raising prices. Apple is selling the iPhone and iPad to distributors such as Redington India at the same price as in 2012 even after the currency’s nearly 16 percent drop this year, said Rajesh Khetarpal, head of Redington’s strategic business unit. Apple declined to comment on pricing in India in an e-mailed response.

Apple’s approach to cap prices is key to help it boost sales in India, which International Data Corporation predicts will replace the United States as the second-biggest smartphone market by 2017.

The largest technology company, facing rising competition from Samsung, will unveil a less-expensive model to tap buyers in emerging economies, a person familiar with the plan has said.

“Even though Apple’s margins in India may be adversely affected, volumes are low and this strategy could pay off if stable prices lure new buyers,” said Kiranjeet Kaur, a Singapore-based analyst with researcher IDC. “This could be a wise move in India, especially if competitors increase prices.”

IDC estimates average selling price for smartphones will fall below $200 by the end of 2013 in the world’s second-most populous nation. Apple’s iPhone 5 16 GB model sells for 45,500 rupees ($697), according to Reliance Digital’s iStore India. Samsung’s Galaxy S4 costs 41,500 rupees, according to the company’s local Web site.

The Korean electronics maker raised prices in India by about 5 percent last month, a company official said, asking not to be identified. Apple trails Samsung, Micromax Informatics, Karbonn Mobiles India, Nokia Oyj and Sony in India’s smartphone market where IDC estimates shipments almost tripled to 9.3 million units in the quarter ending in June. Samsung had a 26 percent share in the period, Micromax was No. 2 with 22 percent, according to IDC.

In comparison, Apple ranked second globally with a 13.1 percent market share in the quarter, according to IDC, trailing Samsung’s 30.4 percent.

The competition among smartphone makers has intensified in India, where Boston Consulting Group estimates total consumer spending will almost quadruple to $3.6 trillion annually by the end of the decade.

“Others have increased prices, but we’re seeing robust growth of all Apple products,” Khetarpal said by telephone from Chennai on Sept. 4. “So why mess with a good thing?”

Redington first became a distributor of Apple computers and iPods in 2007. It started selling the iPad in 2011 and last year began offering iPhones through its network. In June, the Chennai-based company was appointed by the local unit of Lenovo Group to offer its smartphones across India.

Redington shares have declined 33 percent this year, compared with a 0.8 percent drop in the S&P BSE Sensex. The company is about 12 percent owned by Standard Chartered’s private equity unit, according to exchange filings.

The iPhone is also offered by phone service providers such as Reliance Communications to users of its data services.

Consumers looking to buy high-end smartphones choose a device based on their preference between Apple’s iOs, Google’s Android and Microsoft’s Windows operating systems, and cost is a secondary consideration, according to Gupta.

“Once customers in this category make up their minds, a few thousand rupees here and there is not a differentiating factor,” Gupta said by phone. “Apple has been fighting a losing battle.”

The rupee advanced 1.3 percent to 65.2500 per dollar in Mumbai on Sept. 6, according to prices from local banks.

The plunge in the rupee this year, the most among 24 emerging markets after South Africa’s rand, has driven up the cost of imports, stoked inflation and discouraged consumer spending.