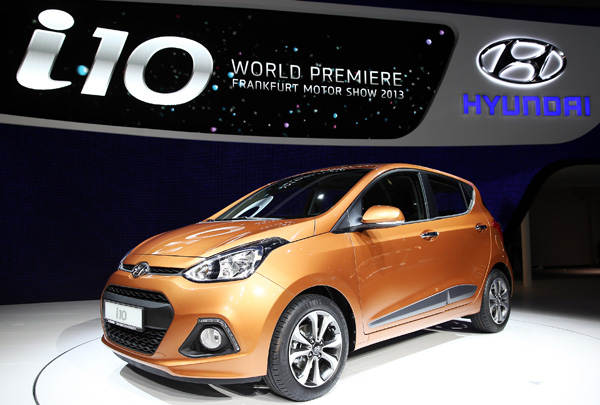 Hyundai Motor’s i10 is introduced at the Frankfurt Motor Show in Germany. Provided by the company

Hyundai Motor plans to roll out 22 new models in Europe over the next four years as it tries to rekindle its once double-digit growth rate.

“We’re calling this ‘Product Momentum 2017.’ These products will help us to sustain our growth and ultimately to achieve a 5 percent market share in Europe,” said Mark Hall, head of marketing at Hyundai Motor Europe (HME), during a media event on Monday ahead of the Frankfurt car show.

HME recently pushed back its target of reaching a 5 percent European market share to the end of the decade from 2016 at the earliest,

Hyundai’s sales growth in Europe has averaged nearly 10 percent annually in the past two years, lifting its share of the market to 3.4 percent last year from 2.6 percent in 2010.

Executives at Hyundai said most of the 22 new models will be replacements, like the next generation i10 that premieres this week at the Frankfurt auto show.

One source at the company said, however, that it would also include new products like a subcompact SUV that could debut as early as 2016.

Tempting buyers with new product is important, since Hyundai could eventually face a wave of customer departures. Many of its cars, like the i10, were bought by price-sensitive customers in 2009, when a host of European governments subsidized purchases of new cars through scrappage schemes.

About three-quarters of the 3.3 million Hyundai cars on the road in Europe are fewer than seven years old.

“Our challenge is to keep owners of these vehicles when they replace them, and improving loyalty forms a key element of our plan to develop Hyundai in Europe,” said HME Chief Operating Officer Allan Rushforth.

Rushforth is putting great hope on the new i10, which Hyundai says offers the features of a larger, more expensive subcompact for the price of a minicar.

The COO, who forecast that the minicar segment would grow by 25 percent by 2016, aims to sell 74,000 i10s in Europe next year, giving it an estimated 6.3 percent share of the segment.

Since the i10 was launched in 2007, a total of 450,000 customers have bought the model in Europe, gaining an average 5.9 percent share of that segment.

The bulk of the new i10s will be built in Hyundai’s plant in Izmit, Turkey, where the company invested 475 million euros ($629.5 million) to expand capacity by 60 percent to 200,000 vehicles per year.