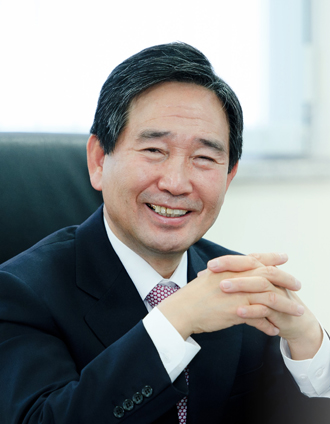 SACHEON, South Gyeongsang - Korea Aerospace Industries President and CEO Ha Sung-yong said the company is aiming for 10 trillion won ($9.21 billion) in sales by 2020, and he wants the government to proceed with the controversial KF-X experimental fighter jet project.

Ha, who became CEO of the nation’s sole aircraft manufacturer in May, said at a press conference at the company’s aviation center that KAI is ready to lead the aviation business in the country.

KAI’s workforce currently accounts for 30 percent of people working in the aviation industry.

“I think our technology and product quality is almost the same as other advanced countries in the aviation business, although we are a little behind in high-tech like stealth and radars,” Ha said. “But I think we have prepared the ground to survive alone in the aviation industry.”

The Korean government in 2010 announced a road map to push the nation’s aviation industry into the top seven in the world by 2020 with production reaching $20 billion and 70,000 people working in the sector. As of last year, Korea was among the top 15 countries, with revenues in aviation production reaching $2.7 billion and only 10,000 people working in the industry.

“The global aviation industry is expected to grow into a $750 billion market in 2020 from the current $460 billion,” Ha said. “Korea’s market share is only 0.5 percent right now, but this means the country has a lot of room to grow.”

The 52-year-old CEO, who previously managed Sungdong Shipbuilding and Marine Engineering, said that the government’s pushing of core defense programs like the KF-X and Light Civil Helicopter and Light Armed Helicopter (LCH/LAH) will be the key to development in the industry. 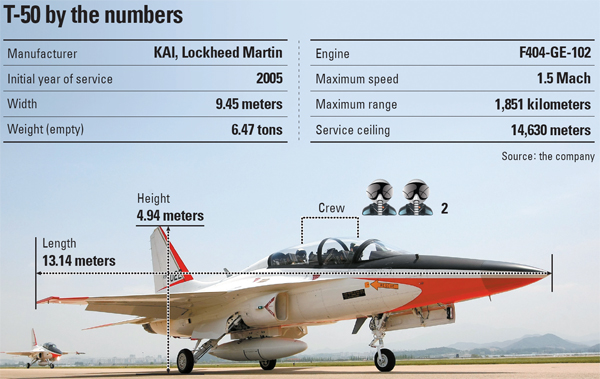 The KF-X project, which dates back to the Kim Dae-jung administration, is up in the air after different evaluations on its feasibility by such institutions as the Agency for Defense Development and the Korea Institute for Defense Analyses.

The Defense Acquisition Program Administration (DAPA) announced this year that it will reevaluate the validity of the project.

The KF-X program is intended to develop a midsize fighter jet that has higher capacity than F-16.

Ha said there is no doubt that KAI has the technology to develop the aircraft and its profitability is assured because around 2020, countries that operate F-16s will need to replace their fighter jets.

“There are about 3,000 to 4,000 F-16s in the world that will need to be replaced around 2020,” he said. “There is no other country that is focusing on developing a next generation midsize fighter jet at this moment and we can enter this niche market by that time.”

According to Ha, Korea’s Air Force needs to replace some 250 fighter jets mid-2020, while Indonesia, Korea’s partner in the K-FX development program, is also expected to buy 50 to 100 aircraft.

“Wouldn’t it be better if the country’s next fighter jet is made in Korea?” Ha said. “I’m sure there will be demand from other nations and we expect to sell a maximum of 500 units.”

According to KAI, the development cost of the KF-X aircraft is around 6 trillion won, while commercial production of the jet will cost around 17 trillion won. 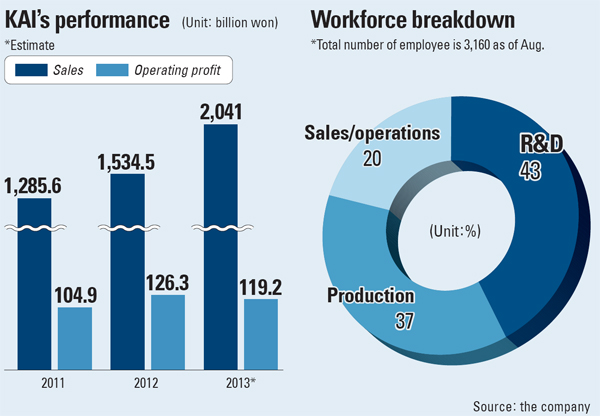 The time of development is expected to be eight years. The company said the KF-X project will create an additional 280,000 jobs.

“The government talks about a creative economy that creates jobs, and the aviation business perfectly fits into that category because - if you see our production line - most of the work is done manually,” Ha said. “It upgrades our air force’s power and also helps to develop the nation’s economy.”

Ha said the company is ready to hire 500 to 1,000 employees beginning next year to work on government defense programs. It will also expand its maintenance-repair-overhaul and space businesses to generate revenue. It also hopes to win orders from the United States Air Force for Korea’s T-50 trainer jet.

“If the U.S. selects our T-50, the world’s jet trainer market will be reorganized,” said Ha. “Since we developed the T-50 with Lockheed Martin, we’re hoping to win that project.”

“The sale of KAI will not be completed in a short time,” Ha said. “In order to grow KAI, the buyer needs to have technology, stable investment and marketing ability.”