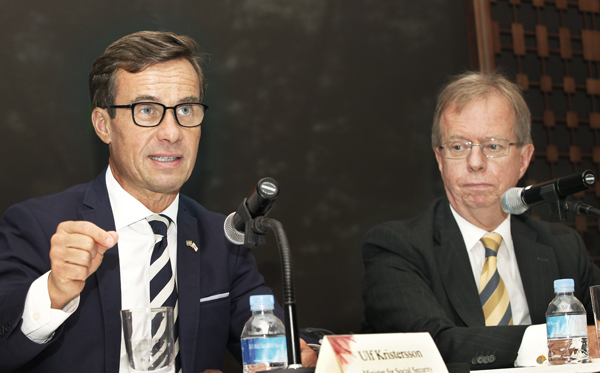 Sweden wants to extend the retirement age to 70 from about 60, in order to keep capable people in the labor market, Social Security Minister Ulf Kristersson told reporters in Seoul.

At the Westin Chosun Seoul on Monday, the minister said Sweden sees the retirement age as a “core issue” to reform its pension system. The government believes too many people are leaving their jobs too early.

“We currently have a flexible retirement age, between 61 and 67, and we think too many people still leave too early from their jobs,” he said in English.

“We have an average exit of nearly 63.5, and it is still increasing too slowly to be economically sustainable.

“The question we need to discuss now is how we could increase the ability and the willingness for all the people to stick to the labor market with the goal of, perhaps, around 70,” he said.

“Our prime minister once said 75 would be a good age, and I agreed,” he continued. “But we have no formal ambition to raise the retirement age to 75. I would say we should raise it close to 70 from 60.”

The minister was part of a delegation of officials from Sweden’s pension ministry and businessmen working in the health care industry.

They were here Monday and yesterday to share with Korean counterparts Sweden’s experience in developing its well-known social welfare system and health care industry.

“We have made significant success during the last seven years in reducing the risk of people’s long-term dependence on welfare,” Kristersson said.

“In the long-term, if you try to simply impose a high level of taxes on people for welfare, you will actually make a mistake. We try to promote a long-term view: how to make more people rely on their own income, less depending on public welfare.”

Discussing Park Geun-hye’s controversial pledge to pay a basic pension to Koreans at age 65, the minister said Sweden had already set up such a system.

But it has strict rules dividing beneficiaries into two categories, offering an “income-related scheme” to those who have worked and a “guarantee scheme” for others who haven’t.

“The most important is the income-related scheme, in which you actually receive a pension based on what you have paid for the scheme,” he said.

“For those who have not worked for so many years, we have a guarantee scheme, which actually offers a decent level but not so high.”

But the amounts to be spent on the guarantee scheme are not a settled issue.

“Serious discussion is going on how much we should make the gap between the guarantee scheme and the income scheme,” he said.