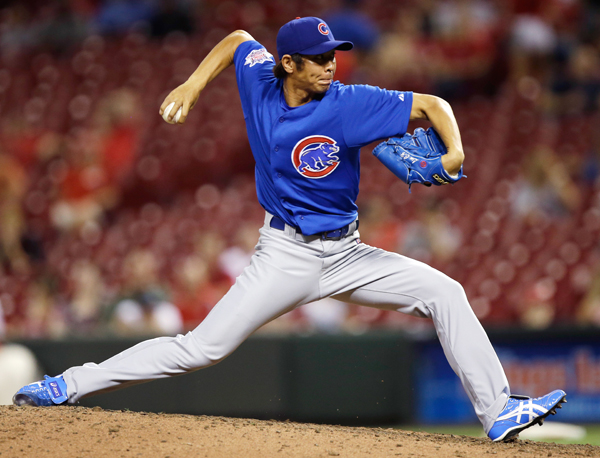 In his second major-league appearance, Lim Chang-yong of the Chicago Cubs pitches against the Cincinnati Reds in the eighth inning, Tuesday, in Cincinnati. [AP/NEWSIS]

Lim Chang-yong of the Chicago Cubs survived another crisis in his second major league relief appearance, pitching a scoreless inning against the Cincinnati Reds on Tuesday.

Choo Shin-soo of the Reds was replaced by Billy Hamilton in the seventh inning, missing what would have been his first Korean duel with Lim.

Lim replaced starter Edwin Jackson in the bottom of the eighth inning at the Great American Ballpark in Cincinnati, with the Cubs leading, 9-1. The side-arm pitcher got off to a good start by retiring the first batter, Cesar Izturis, on a grounder.

But Lim, who allowed a hit and a walk over two-thirds of an inning against the Milwaukee Brewers on Saturday, got shaky and hit Neftali Soto with a pitch.

Soto went to third on a single by Xavier Paul, then Lim threw a wild pitch while facing Derrick Robinson, allowing Paul to advance to second.

The 37-year-old Korean retired Robinson on a fly ball, but Jack Hannahan walked on a full count, loading the bases. Lim got out of the jam by retiring Zack Cozart on a grounder.

Justin Grimm retired the side in the ninth inning, closing out the Cubs’ 9-1 victory. Jackson (8-15) got the win.

Choo went 1 for 3, extending his hitting streak to seven games. He singled to left field in his second at-bat off a 90-mile-per-hour fastball by Jackson, but didn’t score as Jackson got Brandon Phillips to hit into a double play.

Choo’s batting average for the season is .291.