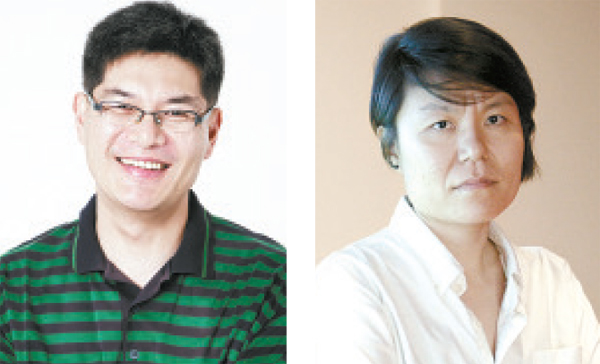 The National Museum of Modern and Contemporary Art (MMCA) said on Tuesday afternoon that Kong was chosen as the winner of the “Korea Artist Prize” over three other finalists.

The prize is co-sponsored by the museum and the SBS Foundation.

Later that day, the Korean branch of the French luxury brand Hermes announced that Jung, who was among the three finalists, won the Hermes Foundation Missulsang 2013 award.

For the Korea Artist Prize, Kong presented oil and acrylic paintings depicting landscapes in gloomy and ominous moods, which show nature’s exhausted state after being exploited by people but also its remaining power beyond human control.

“The jury appreciated that Kong made an achievement in the difficult job of bringing innovation in paintings, the old media,” the museum said in a statement.

His works are on display together with the other three finalists - Shin Meekyoung, Jo Haejun and Ham Yang-ah - at the MMCA Gwacheon in Gyeonggi until Oct. 20.

For the Missulsang award, media artist Jung presented the video series “Act of Affect,” which shows the old actresses who played male roles in “Gukgeuk,” a Korean all-female musical theater genre, which boomed in the mid-20th century and has declined since then.

“With the work, she attempts dismantling the gender dichotomy in our society,” the Hermes Foundation said in a statement.

The works by Jung and the other two candidates - Noh Suntag and Na Hyun - are being exhibited at Atelier Hermes in southern Seoul until Sept. 29.