Hyundai stands up to imports

Hyundai stands up to imports 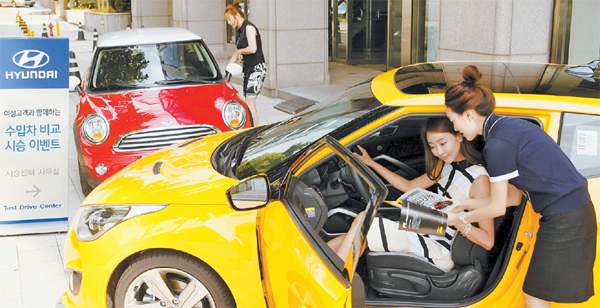 A potential customer is briefed on Hyundai Motor’s three-door Veloster at a showroom in the posh Gangnam neighborhood of Daechi-dong. The automaker is holding a special event in which 360 women will test drive both Hyundai Motor vehicles and imports to compare them. Provided by the company

Leading Korean automaker Hyundai Motor has no doubt that if you drive one of its cars and compare it to an imported German or Japanese car, you may just prefer the Korean-made car.

To prove it, it’s allowing 360 people to do just that. And it’s choosing women drivers to make the comparison, a group that in the past has swooned over imported four-wheel brands.

The company started accepting applicants last week for the test-drive event, closing them yesterday. The women who are chosen will be allowed to cruise in one Hyundai model, and one imported vehicle, for three days.

It’s going to happen across Korea. The women can pick up their cars from one of nine service centers across the country, including Gangnam and Mok-dong in Seoul.

The event will start Friday and last for 12 weeks.

Its stylish three-door Veloster will be competing against the Mini Cooper, while the flagship Sonata will be compared with Japan’s most popular model, Toyota’s Camry.

Its recreational vehicle (RV), New Carens, will be offered at a discount of 300,000 won. This is surprising considering that the all-new RV was only rolled out earlier this year.

Kia Motors is also holding a special deal for owners of imported cars. If they trade in their foreign car for a K-series model of a Sportage R or Sorento R SUV, they will get a discount of between 300,000 won and 500,000 won.

Hyundai Motor’s comparisons with foreign brands was first tried last March. The upcoming test drives are the third promotion of its kind.

Korean consumers have gone crazy for imported vehicles in recent years, and the market share of the nation’s leading automaker and its affiliate has fallen.

Hyundai Motor and Kia Motors last month sold a combined 86,402 vehicles. Although their market share amounted to 69.1 percent, it was the first time their combined market share fell below 70 percent since September 2008. Even in one of the worst economies in recent years, Hyundai Motor’s market share remained above 70 percent and even reached 80.4 percent in June 2009.

Its August sales increased 32.6 percent to 47,680 units. But that growth was largely based on a lousy August 2012 where the company suffered through a prolonged labor strike.

This year, the automaker claimed its problems were centered around a recent company strike, including the dip in market share.

“It’s a temporary drop caused by the labor strike,” said a Hyundai Motor Group official. Market share will recover when production is normalized, he said.

In the first eight months of this year, Hyundai Motor sold 462,593 vehicles, slightly more than the 424,018 units sold during the same period last year.

On the contrary, imported cars grew faster. According to the Korea Automobile Importers and Distributors Association, in August vehicle sales fell 6.5 percent compared to in July. However, when compared to the same month last year, sales were up 32 percent.

The BMW 5 Series and the Volkswagen Golf continue to enjoy high demand from consumers.

In the first eight months, sales of imported cars amounted to 103,417 vehicles. According to the Ministry of Trade, Industry and Energy, this is the shortest period in which the imported vehicle market has reached sales of more than 100,000 units.

At the current pace, imported car sales could reach more than 140,000 units for this year. That would be an increase from 130,000 units sold last year. Sales of imported vehicles exceeded the 100,000 mark for the first time in 2011.

Imported cars have gained strong popularity, especially among young female drivers, due to their sleek designs and more affordable price range, thanks to free trade agreements that the Korean government signed with Europe and the U.S.

Although Hyundai Motor made amends with its labor union earlier this month, it still remains questionable whether or not its sales will bounce back.

Hyundai’s public image has been dented by its labor union, which has held strikes almost every year in the last two decades, demanding wage increases that are much higher than in other Korean companies.