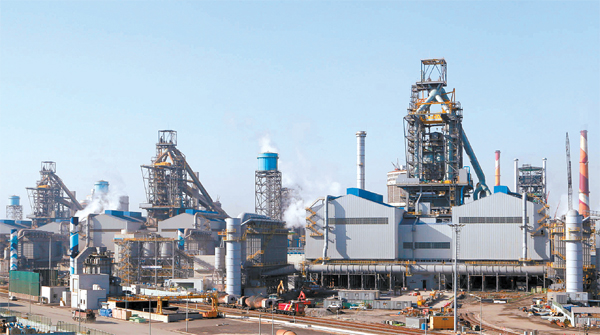 Hyundai Steel’s third blast furnace at its Dangjin plant in South Chungcheong. The latest furnace, which has an annual production capacity of 4 million tons of raw steel, officially started initial operations yesterday. Provided by the company

DANGJIN, South Chungcheong - With the completion of its third blast furnace, Hyundai Steel, the nation’s second-largest steelmaker and affiliate of the Hyundai Motor Group, yesterday announced the completion of its Dangjin Integrated Steelworks, a plant that specializes in automobile steel.

More than 500 guests, including Hyundai Motor Group Chairman Chung Mong-koo and Marc Solvi, the CEO of Paul Wurth, the Luxembourg-based engineering firm that designed the blast furnace, attended the lighting ceremony for the third furnace.

“Despite the global economy slowdown, Hyundai Steel has invested nearly 9.9 trillion won [$9.1 billion] over the last seven years, created some 200,000 jobs and helped the development of the regional economy,” Chung said at the ceremony. “Hyundai Steel will keep move forward to become the world’s best steelmaker and contribute to the country’s economy with more investment and job creation.”

Just like the first and second blast furnaces, the latest has an inner volume of 5,250 cubic meters (185,000 cubic feet), with a maximum width of 17 meters (56 feet) and a height of 110 meters. Each furnace will be able to produce 4 million tons of raw steel annually, and the third is expected to go into full operation late this year.

With the Dangjin Plant, on which construction began in October 2006, Hyundai Motor Group now has the nation’s first privately-invested steel mill. After investing 6.23 trillion won to build the first and second blast furnaces, it spent 3.6 trillion won for its third furnace, positioning Hyundai Steel to be an automotive materials specialist.

According to a study from the Korea Academic Society of Industrial Organization, during the seven years of Hyundai Steel’s Dangjin plant construction, the economic impact was immense. More than 95,800 jobs were created during the construction phase, while 110,300 jobs were created by the plant’s operation. The boost to the economy is estimated at 45.8 trillion won over seven years, according to the academic group.

The operation of third blast furnace will allow Hyundai Steel to produce a total of 12 million tons of steel products through the integrated steel work process, in addition to 12 million tons of steel made from an electric-arc furnace. The company now can produce a diverse portfolio of products, including steel for automobiles, shipbuilding and construction-related products like reinforced bars and H-sections.

Furthermore, its production capacity of 24 million tons will make Hyundai Steel the world’s 11th largest steel maker. At the moment, the company sits at No. 15, according to data from the World Steel Association.

Hyundai Motor Group hopes the new Hyundai Steel facility will create synergies with its affiliates, like Hyundai Motor, Kia Motors and Hyundai Hysco, to improve the overall manufacturing flow in the entire group.

Hyundai Motor is building an iron powder plant, with plans of moving into full production beginning February 2014. It will invest 120 billion won to build a plant that can produce 25,000 tons of iron powder a year.

Hyundai Steel will also support its affiliates by producing specialty steel used for making core materials for automobile parts. The company will invest 1 trillion won on 236,000 square meters of land for a special steel production plant that has an annual capacity of 1 million tons.

The operation of Hyundai Steel’s specialty steel plant is expected to greatly alleviate Korea’s reliance on imported steel. Last year, 2.31 million tons of specialty steel, or about 30 percent of all domestic demand, came from abroad.

Chairman Chung said that, with the third blast furnace, the Dangjin plant will supply many Korean industries, such as construction, shipbuilding, machinery and automobiles, with a supply of high quality steel and iron.

“Since the steel industry has a close relationship with the nation’s economy, I think it will help in Korea’s economic advancement,” Chung said.

Hyundai Steel said that its third furnace will also enhance the nation’s trade balance. Because the plant can supply 12 million tons of steel products annually to Korean companies, there will be a savings of 8.9 trillion won in imports, according to the company.

According to industry data, Korea is the world’s biggest consumer of steel per capita. However, due to the lack of crude steel production capacity, the country has to import more than 20 million tons of semi-finished steel products annually, mainly from Japan and China.

Last year, Korea imported 20.71 million tons of steel products, accounting for about 30 percent of nation’s crude steel production capacity. For example, Korea has a $25.6 billion trade deficit with Japan, and $3.8 billion of that deficit came from steel imports.