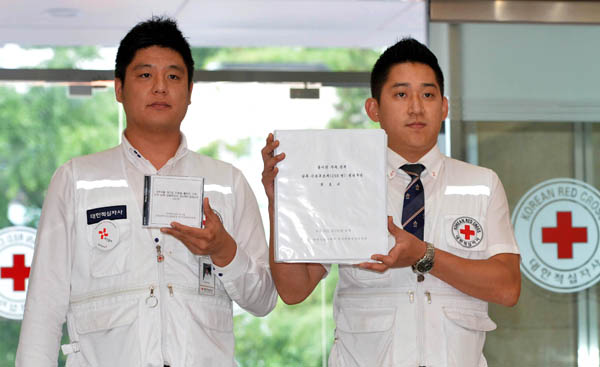 At the headquarters of the Korean Red Cross in Seoul yesterday, officials plan reunions scheduled for Sept. 25-30 at the Mount Kumgang resort. [NEWSIS]

Ahead of the reopening of the Kaesong complex Monday, the two Koreas yesterday kicked off further talks to negotiate technical details of running the industrial park focusing on whether to install Internet facilities and allow workers to use mobile phones in the complex.

Two sub-committee meetings focusing on communications, travel and customs discussed how to enhance communications and traveling in and out of the complex, the legal rights of workers, as well as rights of South Koreans who have extended sojourns in Kaesong, according to the Unification Ministry.

The committees are expected to discuss the maximum number of phones allowed in the park and how to build up an Internet infrastructure. They were expected to focus on issues not covered at the second joint South-North committee for the Kaesong Industrial Complex on Tuesday.

Officials also said the power supply to the Kaesong Industrial Complex was normalized as of yesterday.

The Korea Electric Power Corp. said electricity being supplied to Kaesong has increased from the 20,000 kilowatts during its five-month shutdown to the normal 100,000 kilowatts ahead of the reopening of the park.

The inter-Korea Kaesong park has been on hiatus since North Korea unilaterally withdrew its workers in April.

Unification Ministry spokesman Kim Hyung-suk spoke at a briefing yesterday of the 148 billion won ($136 million) worth of insurance payments made to 46 companies at the complex, saying they would need to pay it back in order to restart their operations at the complex.

“It doesn’t make sense if you get both insurance money and be able to operate your business,” he said.

Officials from the two Koreas’ Red Cross offices yesterday exchanged lists of candidates for reunions of families separated during the 1950-53 Korean War at the truce village of Panmunjom.

The reunions are scheduled for later this month.

The Korea National Red Cross said it confirmed the identity and locations of 149 people on a list of 200 South Koreans sent by the North on Aug. 29.

It also confirmed the availability of 167 of the 250 North Korean family members requested by the South.

Red Cross officials said that the final shortlist of 100 people from each side would give priority to the oldest and most directly related relatives.