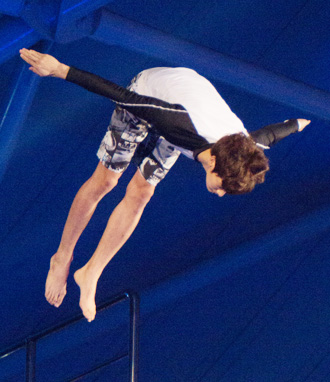 In the competitive world where reality TV and celebrities meet, how much is too much? A series of injuries on MBC’s “Star Diving Show Splash” that led to the program’s cancellation now have industry experts asking whether local broadcasters have gone too far in their quest for ratings.

Injuries big and small were an issue nearly from the beginning for “Splash,” which featured 25 stars divided into four teams, competing to learn diving skills. First, comedian Sam Hammington was forced to miss filming for JTBC’s “Witch Hunt” because of injuries, and actor Lee Hun got dark bruises below his eyes. But after comedian Lee Bong-won suffered a fracture to his eye socket on Sept. 4 that required surgery, “Splash” was put on hold, and then Thursday it was canceled.

“The decision came to protect the safety of the participants,” said the broadcaster.

Although Lee has been discharged from the hospital, the incident started a debate about how appropriate it is for celebrities to be taking part in competitions where they could get hurt. The latest wave of popular reality programs in particular have featured activities that are supposed to push the competitors to their limits.

“Splash” was the local license of “Celebrity Splash,” a program that started in the Netherlands and has since been made in 20 countries, including the United Kingdom and France.

SM C&C, a subsidiary of K-pop giant SM Entertainment, bought the rights to the format and was planning to produce around 12 to 13 episodes.

However, “Splash” has now become more famous for being canceled due to safety issues - industry observers think it is the first time this has happened in Korea. 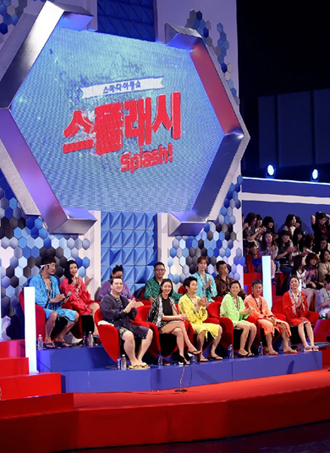 Not-yet-injured participants waiting for their chance to go jump in the pool on “Star Diving Show Splash.” [JoongAng Ilbo]

The SBS show “Law of the Jungle” is credited with being the first program that pushed stars to their limits. It, too, had a few injuries during its filming, including to comedian Kim Byung-man.

Kim also hurt himself on another reality program, the figure-skating-themed “Kiss and Cry” on SBS back in 2011, where he twisted his ankle ligaments.

Another program now in the spotlight for its potential risks is MBC’s “Real Men,” which features celebrities going through military-style training. Actor Kim Su-ro suffered through intense training despite injuries to his shoulder that eventually forced him out of the program altogether.

SBS is now gearing up to present a show where celebrities learn to become fire fighters. They train with fire hoses, wearing 10 kilogram (22 pound) oxygen tanks in scorching temperatures.

And KBS is preparing a show where celebrities try to be police officers.

One local expert said these types of shows only show how weak Korea is for original ideas, as each broadcaster just copies the other when a popular format is discovered.

“As similarly formatted shows are competing, it is inevitable that celebrities would be asked to tackle harder and more dramatic challenges,” said Min Seong-wook, a professor at Paekche Institute of the Arts.

“It is essential to have the appropriate safety equipment to protect the celebrities on these shows.”