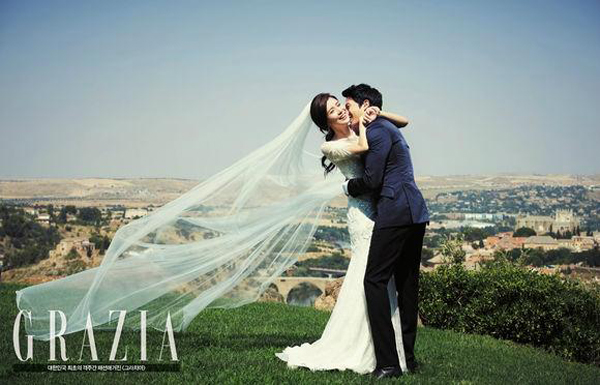 Ji Sung and Lee Bo-young’s promotional wedding shoots will be up for grabs very soon.

The pictures will be published in the October edition of the tabloid magazine Grazia.

A teaser photo released earlier showed Lee and Ji looking happy against the backdrop of nature. The photos will include behind-the-scene moments where Ji apparently surprises his bride-to-be with the proposal.

The two drama stars were in Spain last month for five days. Since then, fans were expecting the release of the pictures.

The two met on the SBS drama “Save the Last Dance for Me” in 2004. After seven years of dating, they announced their upcoming marriage earlier this month. The couple will tie the knot at Walkerhill Hotel, eastern Seoul, on Sept. 27.

The date was postponed because Ji wanted to take on an additional drama before he became a married man. He said he couldn’t resist taking a role in the upcoming KBS drama “Secret,” even though he was originally planning to prepare for his wedding.