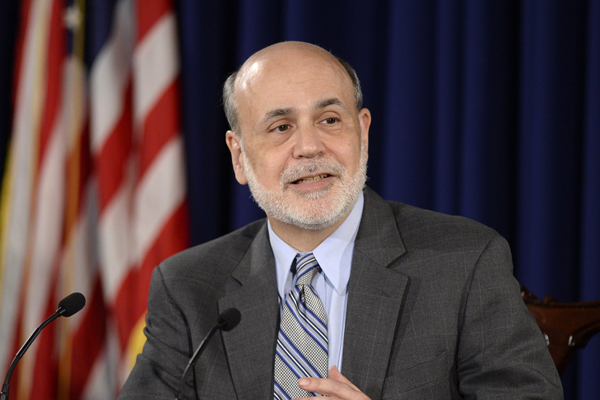 Federal Reserve Chairman Ben Bernanke speaking during a news conference at the Federal Reserve in Washington on Wednesday. The Federal Reserve has decided against reducing its stimulus for the U.S. economy because its outlook for growth has dimmed in the past three months. [AP/NEWSIS]

An unexpected announcement by the U.S. Federal Reserve to maintain its $85 billion worth of asset purchases is increasing uncertainty in the overall financial market, a government official said yesterday, although the actual impact of the decision might be good for the local stock market.

Choo Kyung-ho, vice finance minister, said that the Ministry of Strategy and Finance will enhance its monitoring measures following the postponed tapering of U.S. Treasury bonds.

“Right after the Fed’s announcement, stock markets around the globe showed big rallies, but they all retreated the following day, indicating that uncertainties are still there,” Choo said at a meeting on macroeconomic and financial affairs.

“It is like we are seeing the glimmering shadow of a big tiger in front of us,” he added.

The vice minister predicted the U.S. Fed would begin tapering asset purchases in December at the earliest, when U.S. government borrowing is expected to near its debt ceiling.

“The stock market, which opens tomorrow after a five-day holiday, could welcome the decision. But on the macroeconomic front, uncertainty will expand significantly, adding greater volatility to the market later on,” Choo said.

While experts are divided about the U.S. quantitative easing program, its extension is seen as largely attributable to slower-than-expected recovery in the U.S. economy.

“Postponing the QE exit strategy is not a good sign because it means the U.S. economy is recovering at a slow pace,” said Sung Tae-yoon, an economics professor at Yonsei University. “A slow U.S. recovery is not good news to the Korean economy, which is highly reliant on exports.”

Finance Minister Hyun Oh-seok said despite the decision to continue quantitative easing, the Korean government should be a guard against a tapering of the program.

“The latest decision strongly suggests that the U.S. is going to carry out an exit strategy in the near term,” Hyun told reporters at a press conference after the APEC Finance Ministers’ meeting on Thursday in Bali, Indonesia.

“In a positive sense, the Korean market would face less impact from the delayed tapering in the short run, but we should keep monitoring the situation in the long run,” Hyun said.

The Ministry of Strategy and Finance convened an emergency meeting on Thursday to keep watch on local financial markets, even though they were closed for the national Chuseok holiday.

“Although the Fed’s decision can be favorable for the market for now, risks remain because QE tapering will start within the year,” said Eun Sung-soo, deputy minister for international economic affairs, at the meeting.

Some in the United States predict tapering could begin as early as next month.

Federal Reserve Bank of St. Louis President James Bullard, a voter on policy this year who has backed the record stimulus, said the Fed may make a small cut to bond purchases as early as in October.

“That was a borderline decision” after “weaker data came in,” Bullard said yesterday on Bloomberg Television’s “Bloomberg Surveillance” with Tom Keene and Sara Eisen. “The committee came down on the side of, ‘Let’s wait.’”

Bullard called October a “live meeting,” because “it’s possible you could get some data that change the complexion of the outlook and could make the committee be comfortable with a small taper in October.”