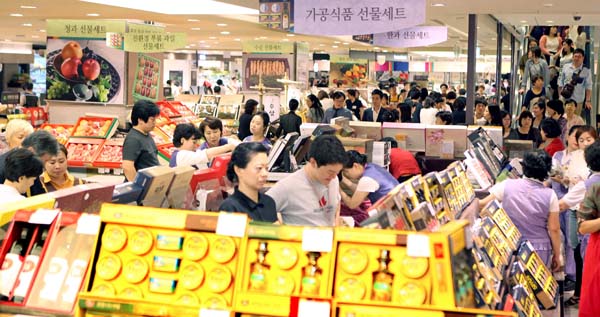 Sales of Chuseok gift sets were up across the board this year - up slightly at low-end retail chains that mainly sell inexpensive gift packages, but rising sharply at upscale department stores that sell expensive gift sets.

Those growth rates were all much higher than reported last year, when Lotte recorded a rise of 5.9 percent, Shinsegae 6.2 percent and Hyundai 2.5 percent.

Galleria Department Store said its gift set sales jumped 23 percent compared with the same point before Chuseok last year. Its biggest growth came from meat gift sets, which were up 31 percent, followed by health foods up 30 percent, dried food up 29 percent and vegetables up 12 percent.

Galleria also noted a huge split between expensive and inexpensive gift sets - those that cost more than 300,000 won ($276) shot up 172 percent compared with last year, while gift sets less than 200,000 won declined 25 percent.

On the other hand, sales of fish gift packages fell 10 percent from a year earlier at Shinsegae, as consumers continue to fear contamination by radiation leakage from the crippled Fukushima nuclear plant in Japan.

“Although the sales growth slowed a little bit as we neared the Chuseok holiday because the holidays were unusually long this year and people went on vacations, we made a good sales performance considering the current consumption downturn,” said a spokesman for Shinsegae.

The news was not so good for low-end discount retailers, though, whose low-cost gift sets performed poorly.

Homeplus, however, performed better, up 9.3 percent.