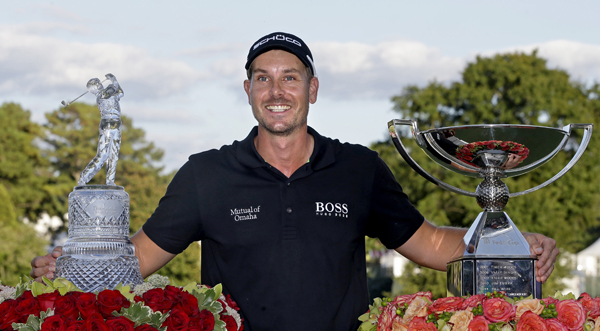 The Swede clinched the PGA Tour’s season finale by three shots after carding a 2-under-par 68 on a hot, muggy afternoon at East Lake Golf Club. He will match his previous high when he climbs to fourth in the world rankings on Monday.

Stenson’s fourth career triumph on the U.S. circuit also earned him the eye-popping FedEx Cup playoff bonus of $10 million and capped an astonishing run of form he has produced since July, featuring six top-threes in his eight starts worldwide.

“Confidence can turn around very quickly in this game, but it can take quite a long time as well,” the 37-year-old Swede, who won the Deutsche Bank Championship earlier this month, said after posting a 13-under total of 267.

“Every player, no matter how good or bad you play, you still have to kind of battle certain feelings, certain times, certain shots you don’t like, and it’s no different for me. It’s just been a great summer, way beyond what I could imagine.

“The play that I have performed since mid-July has been incredible,” added Stenson, whose purple patch started with the Scottish Open in July and includes two wins, a runner-up spot at the British Open and third place at the PGA Championship.

However, it has been a long road back for the Swede, who won the biggest title of his career at the PGA Tour’s 2009 Players Championship at Sawgrass but struggled for much of 2001 and 2002, and again during his 2011 campaign.

“It’s been a lot of hard work and a couple of changes,” he said. “I went back to my old sports psychologist last summer and put more of a long-term plan in place for all the different areas of the game.

“It’s been some good work there that’s starting to pay off big time. It wasn’t like you wake up in the middle of July and you start playing fantastic. I put the work in during the spring.”

Asked what getting back to No. 4 in the world rankings on Monday would mean to him, Stenson replied, “It says that I never give up.

“I went from way, way back down in 2001 and got back up to No. 4 the week after my win at Sawgrass in 2009, so I’m obviously touching my personal best there.

“If I keep on playing well, I will have a chance, I guess, later on in the year to be able to improve on that.”

Stenson is looking forward to a four-week break from golf before he sets his sights on trying to win the European Tour’s Race to Dubai (money list) title to complete a unique double on both sides of the Atlantic.

“That’s obviously next on the horizon,” said the Swede, who leads the Race to Dubai rankings over Graeme McDowell (second) and Justin Rose (third). “Thankfully, I’ve got a whole month now where I can rest and enjoy this incredible run that I’ve had.

“Then have some time to get back into get some good practice down before I head out to the BMW tournament in Shanghai there on the 19th of October. I’m in a great position for winning the money title in Europe. Again, it’s going to take some good play.

“I’m going to try my hardest to accomplish that. No one’s won the FedEx Cup and the Race to Dubai. Luke [Donald] and Rory [McIlroy] won both the money titles. We’re going to give that our next shot.”