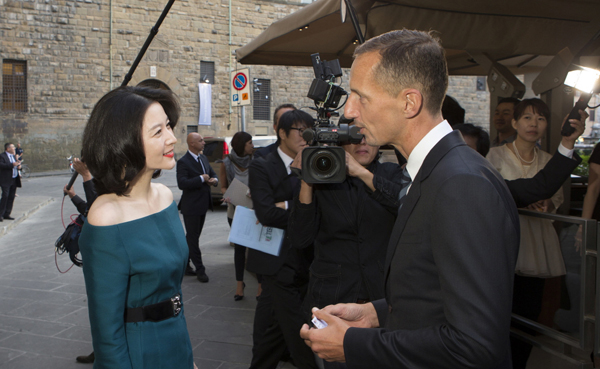 The dinner was held in Florence, a city that has shown great interest in Korean culture, most notably by hosting a Korean film festival for the past 11 years.

Despite the interest, Korean food has not been properly introduced in the venerable Italian city, which is nearly without any Korean restaurants, so the Italian fashion house decided to promote Korean cuisine there together with Lee.

“It makes my heart race that I can share Korean cuisine in this city with 2,000 years of history,” said Lee during the dinner.

“To Koreans, sharing food means sharing friendship, and I hope this will be a stepping stone for Korea and Italy to grow closer.”

On hand at the dinner were many leading local luminaries of the arts, including Riccardo Gelli, director of Florence Korea Film Festival.

The results can soon be seen as part of an SBS documentary, tentatively titled “Lee Young-ae’s Feast.” The program is scheduled to air during the Lunar New Year holiday next year.