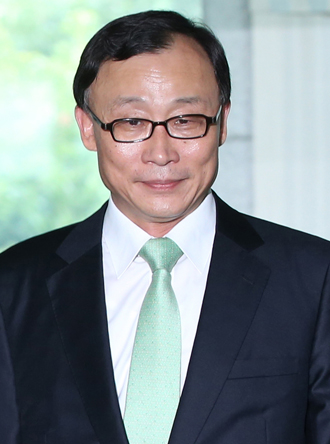 Prosecutor-General Chae Dong-wook sued the Chosun Ilbo for reporting that he has an 11-year-old son born out of wedlock and demanded a correction. He also vowed that DNA tests would reveal the truth.

“In the course of trial, I will put every effort into disclosing the truth of the matter, including taking a DNA test,” said Chae in a statement released yesterday after filing the suit at the Seoul Central District Court.

The statement also called on the family of the 11-year-old boy to let his DNA be tested.

“I ask them to take the test at an early date so the controversy can be settled,” he said.

The court cannot force a DNA test on the boy.

Chae’s move came 18 days after the Chosun reported the love child allegation on Sept. 6, 11 days after he tendered his resignation, which has not been accepted by President Park Geun-hye.

She said the truth about the case must be revealed first.

Reports have blamed the Blue House for leaking news of the alleged love child to the Chosun because it was angry at Chae’s aggressiveness in investigating charges that the National Intelligence Service intervened in Park’s favor during last year’s presidential campaign with an online smear campaign against her challenger.

The 54-year-old chief prosecutor said in the statement that he tendered his resignation just hours after the Ministry of Justice ordered an internal investigation into the allegation because “with the prosecutor-general being subject to an investigation, I cannot command the prosecution fully, not even for a single day.”

Chae also said it would be difficult for him to go back to his job as prosecutor-general, even if the Justice Ministry cleared him of the allegation.

On Sept. 6, the Chosun reported that Chae has an illegitimate son who was born after an extramarital affair in 2002 with a restaurant owner. The conservative newspaper reported Sept. 9 that Chae’s name was on the child’s school records as his parent.

In the complaint submitted to the court, Chae argued that if he really had a son with the restaurant owner he would not have visited her restaurant with junior prosecutors after the child was born.

Meanwhile, the child’s mother sent letters to both the Chosun and the daily Hankyoreh saying she had “borrowed” Chae’s name for her son’s school records because she hoped he would follow in Chae’s footsteps as an upright character.

The top prosecutor at first said he would prove the woman did not bear him a child with a DNA test. But on Sept. 13, a week after the first report, Chae tendered his resignation hours after Justice Minister Hwang Kyo-an ordered an internal investigation into the allegation.

The ministry’s call for the probe of a prosecution chief was the first in its history.

Opposition parties suspect the Blue House and the Justice Ministry collaborated in ousting Chae out of disgruntlement over the prosecution’s indictment of former NIS chief Won Sei-hoon for allegedly directing NIS agents to meddle in last year’s presidential election. The presidential office and the ministry have denied they had any part in Chae’s offer to resign.