Samsung confirms a curved smartphone is next

Samsung confirms a curved smartphone is next 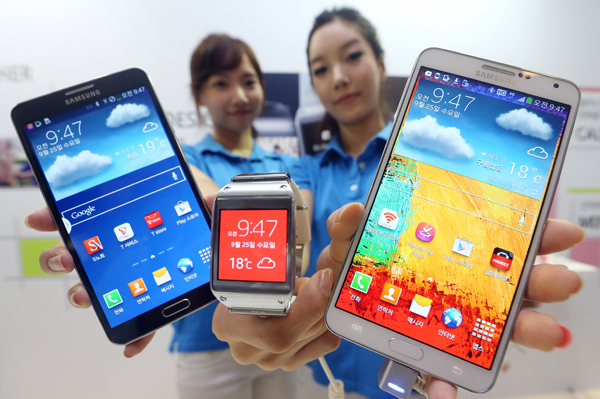 Models hold up the Galaxy Note 3 and Galaxy Gear at Samsung Electronics headquarters yesterday, which went on sale yesterday. [NEWS1]

Samsung Electronics said yesterday that it will introduce a phone equipped with a curved screen next month as it strives to maintain a fragile momentum over archrival Apple in the world’s smartphone market.

Yesterday, the Korean tech giant also released the Galaxy Note 3 and its smartwatch, the Galaxy Gear. The two devices, which were unveiled in Germany early this month, have drawn mixed reactions overseas and left investors unimpressed. The company’s stock fell 9,000 won ($8.40) yesterday, or 0.66 percent, to 1,364,000 won.

Presenting the Note 3 and Gear to its hometown fans during a press conference at its southern Seoul headquarters, Samsung executives tried to stem criticism of the two products by stressing their “cool” factor.

They also confirmed rumors about a smartphone equipped with a curved screen, which will be a first in the world smartphone market.

But details of the phone are still secret. The company said it will hold an additional media briefing later to introduce the product.

Some rumors say the company is working on a flexible phone, but it wouldn’t comment on those rumors yesterday.

“We will introduce a curved display smartphone in October,” D.J. Lee, Samsung Electronics president, told the media conference yesterday. “Regarding the specifications of the product, we will have another time to talk about that.”

Coming out a year after the release of the Note 2, the Note 3 has several new functions such as Action Memo, Scrapbook, Screen Write, S Finder and Pen Window. It comes with a slightly larger OLED screen: 5.7 inches compared to the 5.5-inch screen of the Note 2.

“The Galaxy Note 3 will carry on the fame of the Note, which is well positioned as a unique smart device category,” said Lee.

The company also expressed confidence in the Galaxy Gear wearable device, which it called the first of its kind at the IFA 2013 trade show in Berlin this month.

With a 1.63-inch display, the smartwatch features such functions as S-Voice, Smart Relay and Auto Lock. It has a 1.9-million pixel camera. Around 70 apps are built into the device.

The smartwatch currently can only sync with the Note 3, but the company promised to make it compatible with some other Samsung smartphones such as the Note 2, Galaxy S3 and S4.

“It is not a simple watch,” said Lee. “Anyone would like to have one once they try all of its functions.”

In response to questions about whether the Gear’s newness will quickly fade, Lee said that the smartwatch has triggered a “very positive response” across the world. But he cautioned, “We have to wait to see if those responses translate into sales.”

“People could be pessimistic about it, as the market has not been created yet, but I am personally confident,” said Lee Young-hee, Samsung’s vice president of mobile. “We will launch a great deal of marketing activities (for the Gear).”

The two products, both offered in Korea by all three domestic mobile operators, come with hefty price tags. The Note 3’s price was set at 1,067,000 won while the Gear is 396,000 won.

Both products were released in 58 countries yesterday, including Korea. Next month, the products will be available in around 140 countries.

With the release of the Note 3 and the Gear, smartphone makers are expected to wage a fierce competition in the Korean market. Apple announced its iPhone 5S and 5C early this month and LG Electronics is scheduled to sell its Vu 3 - a “phablet” like the Note 3 - beginning tomorrow. The smallest domestic maker, Pantech, is also expected to release a new smartphone next month.

Apple said Monday that it sold about 9 million iPhone 5S and 5C models in the three days since their release.