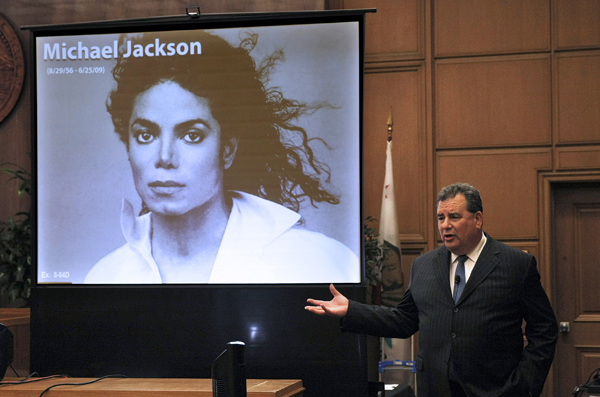 Brian Panish, attorney for the Michael Jackson family, delivering his closing argument in a courtroom in Los Angeles, Tuesday. [AP/NEWSIS]

LOS ANGELES - A lawyer for Michael Jackson’s family on Tuesday portrayed concert promoter AEG Live and Jackson’s doctor as mercenaries who sacrificed the pop star’s life in a quest to boost their own fortunes.

Attorney Brian Panish made the claims while delivering his closing argument in the long-running negligence case, asking jurors: “Do people do things they shouldn’t do for money? People do it every day.”

A $150,000-a-month contract to care for Jackson was a lifeline to help Dr. Conrad Murray climb out of his financial troubles, Panish told jurors, saying the doctor was $500,000 in debt and about to lose his home.

AEG Live, meanwhile, had only one interest - launching a world tour for the King of Pop that would yield untold millions in profits, Panish said.

Panish proposed that jurors award $290 million to Katherine Jackson and the singer’s children for noneconomic damages such as the loss of love and comfort.

He gave no specific figure for possible economic damages, urging jurors to make their own decision while reminding them that expert witnesses had said Michael Jackson could have earned more than $1 billion had he lived longer.

Panish also spoke of the anguish of Prince, Paris and Blanket Jackson over the loss of their father and was warned by the judge that jurors should not base their verdict on sympathy.

“We’re not looking for sympathy,” Panish said. “We’re looking for justice, not partial but complete justice.”

He then showed nearly an hour of videos produced for the trial that included heart-wrenching home movies that featured Jackson’s songs and images of his children when they were babies.

However, the focus of his argument was on the relationship between AEG and Murray. Panish told a packed courtroom that Murray’s financial woes were unknown to AEG Live when Jackson proposed the cardiologist as his private physician because the company did not research Murray’s situation.

He also said Murray’s willingness to close his medical offices to take the job could have raised a red flag if AEG Live had investigated the cardiologist.

“Obviously, he was incompetent and unfit,” Panish said. “He caused the death of Michael Jackson.”

Murray was convicted in 2011 of involuntary manslaughter after giving Jackson an overdose of the anesthetic propofol as he tried to sleep during preparations for his “This Is It” concerts in London.

Attorneys for AEG will present their closing argument Wednesday.

The company has claimed Jackson insisted Murray treat him because the doctor was giving him propofol as a sleep aid. The drug is not meant to be used outside operating rooms.

AEG Live drafted a contract for Murray’s services, according to testimony, but it was only signed by Murray. Still, Panish said, the contract was valid because it was the result of oral negotiations with Murray.

Panish urged jurors to act as the conscience of the community and award damages to Jackson’s family.

If jurors find that damages should be assessed, the judge said they must not consider such issues as the grief endured by the Jackson family or the wealth of both sides in the bitterly fought case. A unanimous verdict is not required. Only nine of the 12 jurors must agree. AP