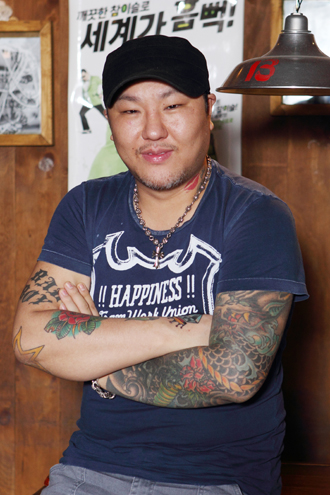 The history of K-pop cannot exist without the songwriters who wrote the hits that turned so many singers into stars.

Among those many producers and songwriters, Brave Brothers (real name, Kang Dong-chul) is one of the top in Korea’s music scene these days.

This past year was perhaps the best yet for Brave Brothers, with a string of hits for top girl groups, including “What’s Your Name?” for 4Minute in May and “First Love” for After School in June.

But more than just a hired gun for established acts, Brave Brothers now has his sights set on creating his own stars. “It’s fun to build up new singers,” he said during an interview with Ilgan Sports, an affiliate of the Korea JoongAng Daily.

“My goal is to make my agency one of the best, like SM, JYP and YG.”

Q. It’s been five years since you left YG Entertainment and started your own company. How is it going?

A. I’ve had some difficulties, but I consider them to be very expensive lessons. The situation isn’t so great, but I don’t plan to stop trying. I’m confident I’ll make it work.

Some people wonder why you want to develop your own singers when you’ve done so well writing songs for other groups.

Producing is my dream and that’s what I want to do. But it costs a lot to develop a singer, so that’s why it’s important for me to keep writing songs.

How do you keep composing so many good songs?

I have different emotions from other writers. In fact, composers need to be born with talent. To some, memorable titles just come up. If composing is 90 percent effort and 10 percent talent, I think that 10 percent is what makes success.

How did you come up with the title of 4Minute’s “What’s Your Name”?

It came from my personal experience at a club. It is common to ask a girl what her name is, where she lives and how old she is.

One day, I realized that many people ask the same questions, so I wrote down the words I heard being used by the people around me. Then I decided to name the song like that; it is the first question people ask.

Do you have any guidelines on who you give your songs?

I don’t think about the name value of the group, and I don’t like to meet singers before I give them my songs.

I first check out music videos and think if I can give the singers a song. I watch them dance and then decide what direction to take.

Do you think your criminal record has hurt your reputation?

I thought it would be better for me to be open about it. I knew it would rise to the surface some day, even if I tried to hide it.

Do you regret sharing that history?

No, I don’t regret it. I paid for my wrongdoings and don’t live that life anymore.