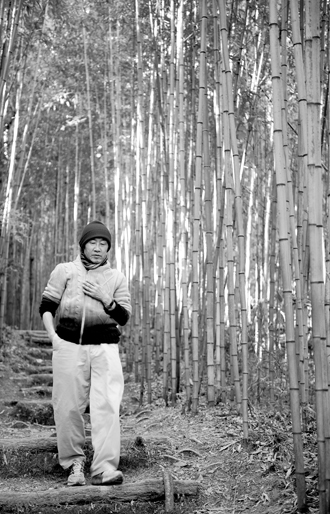 Even during his battle with cancer, novelist Choi In-ho never stopped writing. He is seen here strolling through the woods in Suncheon, South Jeolla, in 2010. By Baek Jong-ha

One of Korea’s most prolific and versatile storytellers has died.

Novelist Choi In-ho died of cancer Wednesday night at the age of 68. Choi had been suffering from cancer of the salivary gland since 2008.

“Before we knew it, Choi In-ho, miniskirts, acoustic guitars and draft beer houses became the icons of 1970s youth culture,” Jang Seok-ju wrote in his book “I Am Literature.” As the quote suggests, Koreans cannot talk about the ’70s without mentioning the novelist.

Born in Seoul in 1945, Choi was talented, confident and even a little rebellious. After graduating Seoul Middle School and Seoul High School, he enrolled in the English language and literature department at Yonsei University.

When he was just in his second year of high school, he won a literary competition sponsored by a local daily with his short novel, “Through a Hole in the Wall.” And when he entered another local daily’s annual literary contest four years later, he even included “a few words on being selected” with his application. He won at the contest.

He wrote a number of best-sellers since the 1970s, including “The Drunkard,” “Heavenly Homecoming to the Stars” and “Stranger’s Room.” The public loved his works for his sensitive voice and sophisticated choice of words. Critics hailed him for broadening the scope of urban literature. His book sales and accolades were incomparable to any other novelist of the time.

“God is here. I saw him. Okay. Let’s go,” were Choi’s last words, according to his daughter Da-hye, showing his usual dignified and bold attitude.

Even if you are not into literature or familiar with ’70s culture, you should have heard the name Choi In-ho because many of Choi’s works were made into movies and TV dramas.

Case in point: “Heavenly Homecoming to the Stars,” which he wrote in 1973. The novel, about a woman named Gyeong-A who has her heart broken then goes through a series of relationships while working at a hostess bar, was made into a film the following year. The novel criticized Korea for being a male-oriented society and made Choi into a best-selling writer. The film was so popular that the name Gyeong-A became ubiquitous among young women who worked at hostess bars.

However, as he became more of a popular novelist, some critics turned against him.

In an interview with the JoongAng Ilbo in 2011 after releasing a novel he wrote while fighting cancer, “City of Familiar Strangers,” Choi said he was “born resisting against belonging anywhere.” “Literary circles can help you feel less lonely, but they don’t make you produce better works, as Ernest Hemingway said. That was my philosophy then, too.”

Literature was his religion

He put a rubber thimble on his fingertips and tape on his toes after he lost his fingernails and toenails from chemotherapy. He chewed ice cubes whenever he felt like vomiting.

In 1987 Choi converted to Catholicism after his mother died. But his acquaintances say literature was his real religion.

“He was a novelist who could write both short and full-length stories filled with cosmopolitan elements. I am heartbroken that a great storyteller is gone,” said novelist Kim Yeon-su. Director Lee Jang-ho, who directed “Heavenly Homecoming to the Stars,” also lamented Choi’s death. “Choi brought changes to the film world. It’s the end of an era.”

A memorial has been set up at Seoul St. Mary’s Hospital in southern Seoul. Cardinal Nicholas Cheong Jin-suk will lead a funeral mass for Choi at Myeongdong Cathedral at 9 a.m. on Sunday. “Choi was the best and most beloved writer of our times, and his works convey his insights into life and his affection toward people,” Cardinal Nicholas said.

Choi is survived by his wife, a son and a daughter.