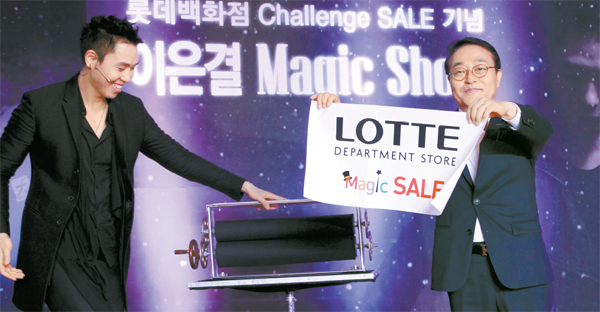 Shin Heon, Lotte Department Store CEO, wearing a navy suit with a red bow tie, entertained 100 or so customers at its department stores in downtown Seoul yesterday with the help of magician Lee Eun-kyul.

The show lasted for half an hour.

The magic show, presented by the top executive of one of the nation’s leading retailers, was part of a strategy to boost sales as Lotte along with Hyundai Department Store and Shinsegae Department Store, which all started their autumn sales yesterday.

But it wasn’t the two competitors he was concerned about, according to Lotte. On the contrary, he was looking to draw potential customers into his store on a fine fall day.

“Our competition is entertainment and leisure like camping and autumn foliage trips,” Shin reportedly said at a meeting with high-ranking Lotte officials last month, according to the company.

He emphasized his management philosophy of creating a differentiated shopping culture where people can drop in for reasons other than shopping. The CEO believes that when the customers are offered more than shopping, sales will climb further.

Lotte also said Shin decided to make an appearance on stage in a bid to be more accessible to customers.

To help boost sales of men’s casual wear last month, Shin started to wear jeans to work and encouraged other top officials to do the same.

According to a Ministry of Trade, Industry and Energy study released Sept. 26, department store sales grew 6.6 percent in August compared with the same month last year, the highest rate since 7.5 percent in March.

In particular, luxury brands showed the highest growth of 11.9 percent year-on-year due to discount events exclusively for premium brands. Household appliances were up 6.9 percent after the introduction of ultra high-definition televisions.