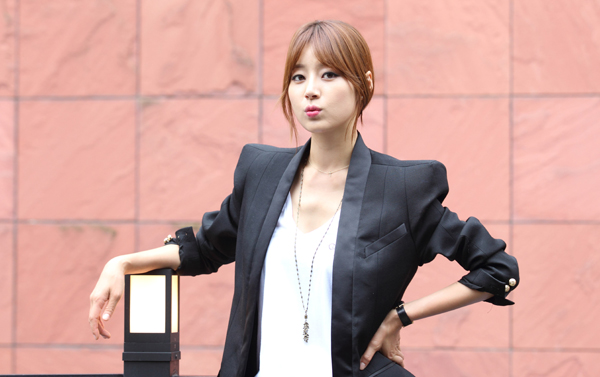 
The recently ended MBC drama “Pots of Gold” pushed actress Han Ji-hye to her acting limits, thanks to its challenging dual role as dueling twins.

Thanks to the popularity of the twin characters Mong-hee and Yoo-na, Han’s star is shining again. However, she said the sweetness only came after some bitterness.

“It was so hard and I cried two or three times, although I usually try to smile in front of others,” she told the Ilgan Sports, an affiliate of the Korea JoongAng Daily, in an interview after the drama ended late last month.

Q. How was it to play a dual role?

A. I didn’t know what to do in the beginning so it was so hard. When I played Yoo-na I had to be sharp and cold, and when I played Mong-hee I had to be smiling again. I normally don’t get irritated on the set, but this time I got angry many times and was very annoyed.

What about working with others on the set?

It was hard having other actors and actresses wait for me when I was changing my makeup and clothing for each character. It was inevitable, but it was very burdensome that so many veterans had to wait for me.

Did you shop for the characters you played?

I spent a lot buying clothes this time. I wanted to show the styles of the two characters well and clothes I was provided with weren’t enough. I ended up spending half the money I got paid on clothes.

Is there particular trick you used when both your characters had to appear on the screen at the same time?

I participated in meetings with the computer graphic team because it was all done with CGI. We have discussed in what order we would film to make it easier for everyone. We checked where to go [when filming]. I felt like I was also serving as an assistant director.

What helped you through six months of filming?

I was acting the twins early on, but one character was off for a while. But I felt some sort of catharsis when I was playing the twins again toward the end of show. It felt fun. Also, the high rating supported me greatly. The rating made all the crew and cast worked together better.

Do you expect to win something at the year-end TV awards?

This is the best role in my filmography. I’m very ambitious and of course I want to win an award.

You are married and have continued working hard. Why so?

I will have to take some time off to have a baby sometime, so I’m working harder to secure my position after I come back. If I don’t work hard now, there is a chance that no one will want me later.

I want to take time off, eat something good and be inspired again.