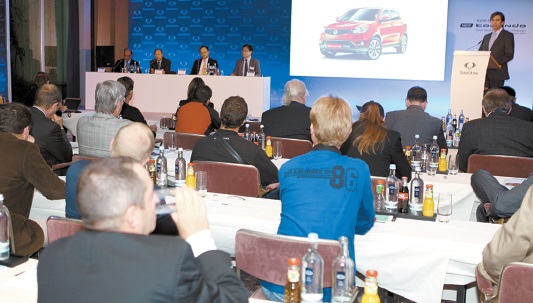 A Ssangyong Motor official talks about the new Korando C during a launch event held in Wiesbaden, Germany, yesterday. About 140 guests attended. Provided by the company

Ssangyong Motor, part of India’s Mahindra Group, yesterday introduced its new Korando C in Germany as part of its emphasis on increasing its share of the European market.

The launch event of its latest version of the sport utility vehicle was held in Wiesbaden, with about 140 guests, including media members and distributors, in attendance.

The automaker plans to establish a solid foothold in key markets, aiming to sell the new Korando C in Europe through 1,300 distributors by the end of the year.

In the China launch last week, the company also debuted its Rexton W and Korando Turismo. In addition, it announced it would expand its dealer network from 80 to 100 by the end of next year.

Ssangyong has sold 130,000 units of the Korando C, which was launched in 2010 for the global market, and the annual sales volume is expected to go up to 80,000 when sales of the new Korando C start in earnest, the company said.

For the first nine months of this year, the Korando C sold 26,424 units overseas, up 16.9 percent from a year ago.

The European market will center around the models with manual transmission, which is preferred by 60 percent of customers, Ssangyong said.

Its manual transmission model has fuel efficiency of 17.2 kilometers (10.6 miles) per liter.

Specifications that meet European regulations, such as daytime running lights and a tire pressure monitoring system were added, as well as various specifications for convenience like as ventilated driver’s seat and highly popular smart key system.

Ssangyong said the SUV market is showing a high rate of growth although the European auto market is contracting. The automaker said the Korando C will play a bigger role as Ssangyong’s global strategic vehicle in a compact SUV market that is recording annual sales growth of more than 12 percent.

“The new Korando C has been reborn, having actively adopted global market needs, and I expect that it will establish itself as a flagship model of Ssangyong in Europe as well,” said Ssangyong Motor CEO Lee Yoo-il. “We will make efforts to strengthen Ssangyong Motor’s brand status while focusing on increasing global SUV market share.”