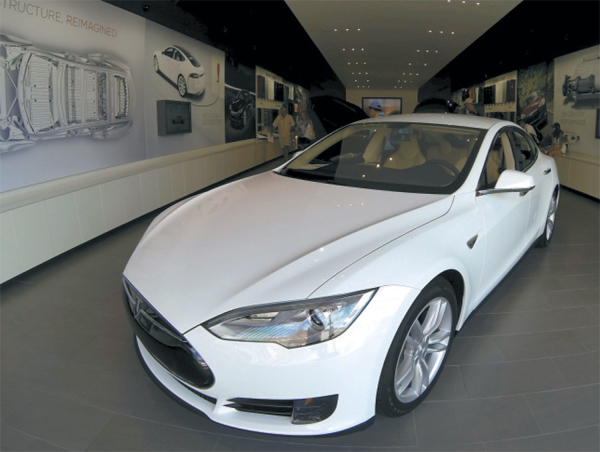 A Tesla Model S electric car is shown for sale at a Tesla store in a shopping mall in La Jolla, California, last month. The electric carmaker may name Samsung SDI as an additional supplier of electric batteries. [REUTERS/ NEWS1]

Popular electric carmaker Tesla Motors may name Korean battery producer Samsung SDI as an additional supplier as the California auto upstart tries to add more models and expand, although at least one source familiar with the discussions described the deal as being far from done.

Both Tesla and Samsung SDI, a unit of Samsung Electronics, confirmed Friday that they are in talks about the Korean company supplying battery technology to Tesla, the maker of the best-selling U.S. electric car, the premium Model S sedan with a price tag of $70,000.

The pending deal highlights Tesla’s confidence in the future of all-electric battery cars, even as some doubters predict all-electric cars are likely to remain a niche in the broader, global automotive market in search of a cleaner and more fuel-efficient technology.

Some of those doubters see fuel-cell cars as a more promising alternative to gasoline-fueled cars.

Kim Sang-eun, a Seoul-based spokesman for Samsung SDI, declined to provide details because the talks are ongoing. “Nothing has been decided,” Kim said.

Tesla’s Palo Alto based spokeswoman, Liz Jarvis-Shean, confirmed the two companies were negotiating but said that Tesla was in talks with other battery suppliers as well.

“We continually evaluate the best [battery] cells and technologies from all manufacturers,” Jarvis-Shean said.

She did not elaborate. Two individuals privy to details of the discussions between the two companies, however, described the talks as being in the final stage. They said the two companies are trying to work out kinks in the pending contract for Samsung SDI to provide battery technology for the Model X, a more affordable electric car model Tesla is expected to add to its lineup in 2014.

One of the sources, who is close to Samsung SDI, said the discussions are “90 percent complete.”

He said Tesla and Samsung SDI have not been able to close the deal mainly because of Samsung SDI’s insistence that Tesla, as part of the deal, buy other components, including touchscreens, from Samsung Group.

No financial details of the deal are available, but one of the sources said “SDI management thinks it is good for improving the company’s image and ultimately helps them in doing more business globally.”

According to the other sources, Tesla and Samsung SDI have finished testing Samsung SDI’s battery technology. The supply deal was described as being “close” to being finalized.

Still, a third source familiar with the discussions disputed the assertion the two companies are close to sealing the deal, saying Samsung SDI’s technology is not “as yet” competitive with battery cells made by Panasonic, Tesla’s primary battery cell supplier. The description of talks being in the final stage is “not accurate,” the third source said.

The news came as shares in Samsung SDI fell as much as 3.7 percent on Friday, after a video of a burning Tesla electric car sent the U.S. firm’s shares plunging overnight. U.S. emergency officials said the fire occurred in the electric vehicle’s lithium-ion battery, the latest in a string of problems for the batteries, which are widely used in electric vehicles sold by various automakers.

For Tesla, the deal is almost a must since it only has one primary supplier of battery technology, Japan’s Panasonic, for the Model S, which is its sole product offering until next year, when it is expected to start selling an additional model called the Model X. Tesla officials believe the company needs to diversify its supply chain to foster competition among makers of key components and to ensure Tesla has a stable supply of parts.

Samsung SDI already supplies battery technology for BMW’s i3 electric car, according to the Samsung SDI spokesman. Samsung Group, which sees slowing sales in smartphones, has been trying to position electric batteries as an area ripe for growth, according to group officials.