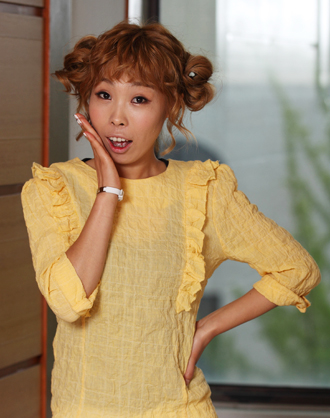 Comedian Oh Na-mi became famous for playing a so-called “ugly girl” on KBS’s “Gag Concert” TV program. In a segment titled “Sistar 29,” the 29-year-old comedian teamed up with fellow entertainer Park Ji-sun to blame her age for her failed attempts at landing a man - 29 being the age in Korea generally considered the cutoff for getting married.

Over the past five years on “Gag Concert,” Oh has performed in many skits that belittle her looks. When asked if she’s okay with playing such roles, she answered, “I don’t know much about my face, but isn’t my body quite okay?” during an interview with Ilgan Sports, an affiliate of the Korea JoongAng Daily.

Q. In fact, you look quite nice in person. Do you get that often?

A. Many people say that I don’t look as ugly as they thought after meeting me in person. I think I look worse on screen. I have thought about getting double-eyelid surgery because I don’t like my drooping eyes, but now I have given up the thought completely as many people think I look good.

You are in shape. Do you work out?

I was a runner until I entered high school. As I worked out for four or five years, I don’t gain weight easily. Of course, I control my diet. I’m good at watching what I eat as that’s a big part of controlling your weight. I think I’m used to suffering when I’m hungry. Instead of snacking, I carry bananas or others things around. I even have abdominal muscles. I regret that I didn’t get to wear a bikini this year because I had so much work. I don’t know much about my face, but my body looks quite okay.

Why did you quit running?

I dreamed about becoming a national team athlete, but I injured my leg when I was a senior in middle school. When I was attending high school and college in my hometown of Gongju [South Chungcheong], people suggested I audition to become a comedian. After hearing that suggestion for some time, I started to want to give it a try. I felt like I would regret it if I lost the opportunity, so I came to Seoul as soon as I graduated from college.

How did the audition go?

I failed once at KBS and once at MBC. I noticed there are so many talented applicants when I was auditioning. I was debating ways to make myself stand out to the judges, so I asked a helper to carry a large bag into the test venue, and I would be inside the big bag. The plan was to have the helper open the bag and say “I’ve brought you something good,” and then I would appear.

As soon as I appeared, the judges cracked up. Then I asked the helper where I was, and the helper said, “These are your future masters. Introduce yourself.” And then I showed some personal tricks and that was positively reviewed.

What is the character a comedian needs to have?

Acting seems to be the most important skill. It is also essential to be confident and know how to enjoy yourself on stage. Don’t you think you should be able to show a variety of characters to the audience? I learned to be relaxed on stage as I was on and off the stage many times.

After experiencing such a process, after a while I become more courageous and relaxed. I’m still nervous each time I get onstage, but now I’ve learned to enjoy it.