At 76, Shin Goo more popular than ever

At 76, Shin Goo more popular than ever 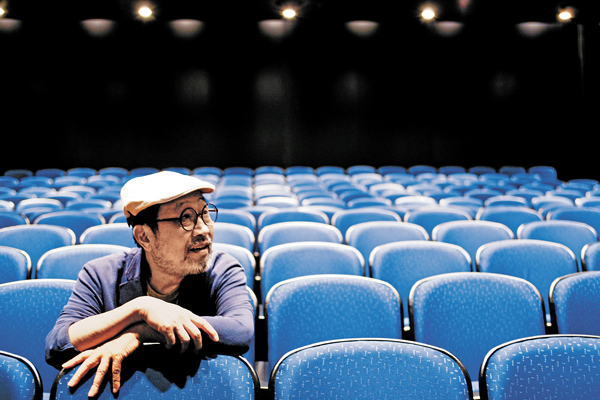 Shin Goo, 76, who is enjoying great popularity from tvN’s reality program “Grandpas Over Flowers,” recently starred in the play “With Father, I and Hongmae” at the White Hall Gallery in Seocho-dong, southern Seoul. By Jeon Ho-seong

Shin Goo has been acting since 1972 in a long array of TV dramas and movies. Although well known and a staple on the entertainment scene, Shin wasn’t exactly a star - until now, at age 76, thanks to his role in the reality TV series “Grandpas Over Flowers.” Together with three other septuagenarian actors, Shin traveled to France and then Taiwan for the program, and their low-key adventures overseas became one of the hottest TV shows in Korea.

But in the middle of his surprising run, Shin traded in his hiking outfits for an old man’s ratty clothes to play a grandfather dying of liver cancer. For a two-week run, Shin starred in the play “With Father, I and Hongmae” at the White Hall Gallery in Seocho-dong, southern Seoul, finishing the run on Sunday.

The play, written by Kim Gwang-tak, is about family, based on the true story of how Kim’s father died and the family had to say goodbye to him all too early. Veteran actress Sohn Sook starred as the wife of the dying father. The hour-and-a-half-long play takes place on a simple, small stage, and the new White Hall is a venue no one has ever heard of, but the auditorium was packed, filled with people who wanted to see Shin.

On stage, Shin is quite different from the friendly grandpa audiences usually see on “Grandpas,” a man who lightly complains about long walks and unfamiliar French cuisine. The authenticity Shin gave his character, on the verge of his death - the way he shook his hands and feet or the times he had difficulty breathing - were more than enough to make audiences weep furiously. But upon hearing the praise being lavished upon him, Shin shook his head humbly and said that “other actors can act like that as well.”

Recently, the JoongAng Sunday sat down with Shin for an interview at the White Hall Gallery to talk about his role in “With Father, I and Hongmae.” Here are some excerpts from the interview. 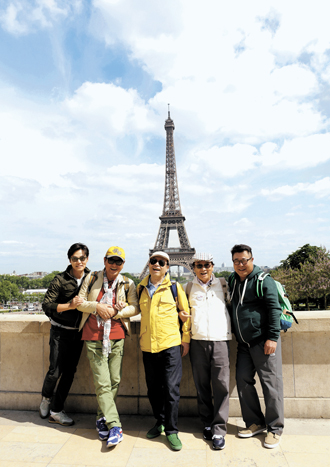 Reality program “Grandpas Over Flowers” takes four men in their 70s around the world, including Shin Goo, center. [JoongAng Ilbo]

Q. Your acting as the sick father was so realistic. How did you prepare for it? Wasn’t playing a character whose life is hanging by a thread, deep in the throes of liver cancer, psychologically burdensome?

A. Well, each role has many elements to it. The level of difficulty is the same for every role. Just because the character that I’m playing is a sick man who is in bed most of the time, I can’t lie down, quiet and motionless, when I don’t have any lines. I need to be able to show the effects of the cancer, even through the blankets that cover my character. The role wasn’t psychologically burdensome, but I had to study because I’ve never experienced the symptoms of liver cancer before. I’ve never suffered from any kind of cancer, or even heard of terms like “hepatic coma.” I first had to research and find out what it was, and then I talked to the writer as the whole story is about his family and his childhood experience. I heard detailed descriptions of his sick father’s condition from him. And, of course, I added my imagination and that’s how it turned out.

What scene choked you up the most?

“Why did I end up with this illness. This is not mine…” This line was the most heartrending. In fact, all the lines of the sick father really struck my heart. For those whose parents have died of similar illnesses, they may sympathize with those lines as well. Not just cancer but any circumstances, families go through similar sadnesses and sorrows.

I heard you try to act in the theater at least once a year. Are there particular reasons why you are so passionate about theater?

You see the auditorium over there? It gets crowded with people coming to see the plays. The actors for this play are relatively older than the audience but, still, young people continue to come and see what’s being staged by such people. They laugh when we laugh and they feel sorrow when we feel sorrow on stage. Unlike other mediums, like the small screen or the big screen, there’s an interchange of feelings here. That’s what makes me, and probably other theater actors on stage, be on stage.

You seem to be enjoying the popularity that’s come your way since your debut in “Grandpas Over Flowers.”

I don’t know how much popularity I am enjoying at the moment, but people keep on calling me a “flower grandpa.” The young and the old, they all call me that when I pass by. It’s actually a new experience for me, to be getting so much attention for being on a reality program, not a drama or a movie. I reckon I am doing this interview because of that, aren’t I?

Until now, you’ve usually come across like a fairly serious person. But on “Grandpas,” you have a totally different image. Are you usually that friendly?

Do I seem friendly on that program? I didn’t plan to appear like that or anything. I just act the way I am and say what I want to say in real life. That’s the charm of reality shows, isn’t it? There’s no script and no rehearsals for such shows. Well, I don’t know what I was like in my earlier years, but I guess with age I turned out to be who I am today.

Left and top: Scenes from the play “With Father, I and Hongmae,” the story of a father with terminal liver cancer, waiting for fate to take his life. Shin Goo plays the father. Provided by Seensee Company

Isn’t it difficult to be polite and show good manners in front of the cameras?

If you are that kind of person who only makes the effort to be kind and polite for the cameras, who would watch that show? If that’s the concept you are taking, people won’t keep watching.

“Grandpas Over Flowers” is a program without any preparation whatsoever. They just put on our microphones and off we go traveling. The cameras follow us everywhere, even to the toilet. When it’s time for bed, they put up a camera in the corner. So the cameras are rolling 24 hours a day. At first, it was really distracting. Even our swear words were caught on camera, so it was like 100 percent exposure. No matter how much we wanted to wrap it up in a pretty wrapper and put a ribbon around it, it wasn’t possible. That’s why it’s “reality,” and that’s why people watch it.

On the program, all the “grandpas” are in their 70s, but they look strong and healthy. Was there any significant meaning to you to appear in an entertainment program?

I don’t really like appearing in entertainment shows. There weren’t any offers for me to appear in such programs, and if there was, I wouldn’t have accepted them anyway. But this program, although it is considered entertainment, it is different than the usual entertainment programs we see on television.

For example, a comedian or an M.C. doesn’t lead the guests and there’s no script. They’ve just gathered us four, who are all of a similar age, and gave us the freedom to enjoy traveling around the world. During the trip, we talk about our experiences and reveal our lives. There are no adjustments or tweaks. That’s why I decided to take part in it.

These days, people live to be well over 100. As an actor in his 70s, don’t you feel there needs to be more activities for your age group to take part in?

I remember there was one company few years ago that planned a sitcom for older actors and actresses, you know, actors like me, Lee Soon-jae and Park Geun-hyung. It was about fathers who were in conflict with their sons, living together under one roof. There were talks and we got together several times, but it never got off the ground. I believe such programs can receive tremendous popularity similar to, or even more than, “Grandpas Over Flowers.”

You know, there are more really fit and healthy men in their 70s than you would expect. When we were young, we thought those over 60 needed to wrap up their careers and stay home or something. But these days, they don’t even celebrate chilsun [a special party for someone’s 70th birthday] to congratulate longevity. I hope there are more roles and works for elderly actors like me to take as we are not like before.