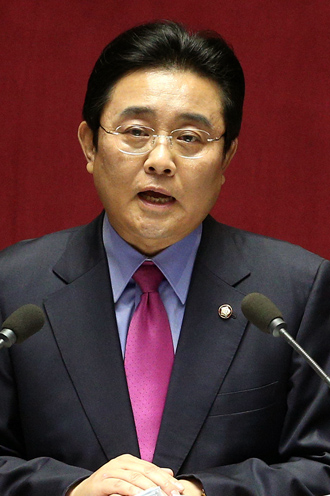 An opposition party leader proposed trading aid to North Korea for the repatriation of POWs and other South Koreans trapped in the isolated country.

Jun Byung-hun, floor leader of the Democratic Party, proposed at the National Assembly yesterday that Seoul adopt the so-called Freikauf policy through which West Germany used to pay money to East Germany for the return of its political prisoners.

The idea has been proposed before but by conservatives, not liberals, and in particular the Lee Myung-bak administration.

“The DP proposes to use the Freikauf method, in which West Germany provided support for East Germany to bring home their prisoners, which we can call the grand negotiation for inter-Korean humanitarian issues or the Freikauf of the Korean Peninsula,” Jun said. “It would be a great project for reunification of the people, in which about 70,000 war-separated families could be reunited, including abductees and POWs, in return for material assistance, but not cash.”

In June 2012, Yim Tae-hee, former chief of presidential staff for President Lee, said in an interview with a local broadcaster that he met with Kim Yang-gon, director of North Korea’s United Front Department, which is in charge of all inter-Korean cooperation, in Singapore in 2009. He said they signed a memorandum of understanding to provide financial support to the North in return for the repatriation of abductees and POWs.

At the time, both agreed to hold a government-level meeting to conclude the matter, but the next inter-Korean meeting failed to reach any agreement. The issue died in the wake of the sinking of the South Korean naval ship Cheonan in March 2010, which Seoul blamed on Pyongyang.

“The idea of Freikauf has been discussed and studied a lot by the government so far,” Kim Eui-do, spokesman of the Unification Ministry, told the Korea JoongAng Daily. “But there is nothing that’s been decided by the government.”

Earlier, the largest opposition party was reluctant to raise the issue of abductees because it didn’t want to offend North Korea.

The exact number of South Korean abductees to the North, including POWs, is unknown because most were kidnapped during the 1950-53 Korean War. The Unification Ministry estimates about 80,000 South Koreans were abducted during the war and 3,800 after the war. Among the post-war abductees, 517 have not returned to the South. Many were fisherman returned by the North.