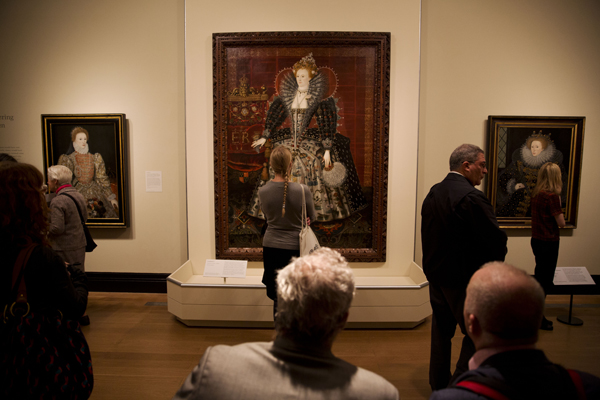 People look at portraits of Britain’s Queen Elizabeth I during a press viewing for the exhibition “Elizabeth I and Her People” at the National Portrait Gallery in London on Wednesday.

The exhibition, which opened to the public yesterday, includes portraits of Queen Elizabeth I, the nobility and gentry from the Elizabethan period, along with many other talented individuals such as explorers, soldiers, merchants, artists and writers.

The gallery, on its Web site, called the 1558 to 1603 reign of Elizabeth I a time of extraordinary enterprise.

“New opportunities for creativity and wealth creation in this period saw the beginning of the rise of the so-called ‘middling sort’ or middle classes,” the museum said. “The Church of England was securely established, and over time much of the country embraced the Protestant faith. The known world was expanding through maritime exploration and trade, cities grew in size and population and the economy flourished and purpose built theatres opened to the public.”The exhibition runs to Jan. 5, 2014. [AP/NEWSIS]