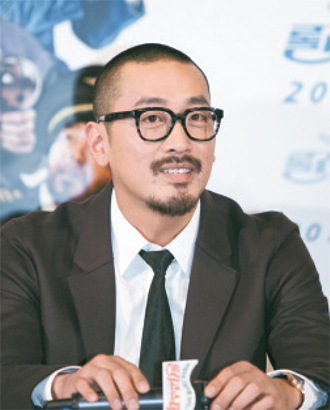 Ha Jung-woo has been one of Korea’s top actors since starring in the 2008 thriller “The Chaser.”

Now, however, Ha is moving behind the camera, writing and directing “Fasten Your Seatbelt,” a comedy about a big Korean pop star, Ma Joon-gyu (Jung Kyung-ho), flying overseas as a terrible storm threatens to make the plane come crashing down.

The whole movie takes place in an airplane, mostly in Ma’s business-class sanctuary, as a series of bizarre characters pass through.

“I just love joking,” Ha said at a press conference on Tuesday at the Busan International Film Festival. “So I made the film just for fun.”

That attitude is evident all over the film, from the plot to the actors to even the music. Most of the actors in the film have worked with him before - even the music director, a colleague he first met while working on “My Dear Enemy” in 2008.

“I have met many directors, and the difference between them and Ha was ambiance,” said Choi Gyu-hwan, who plays a paparazzo in “Fasten Your Seatbelt.” “Ha would play music appropriate for a scene over these large speakers so that the actors could easily focus on acting. Also, he would set up TV-size monitors for the actors to easily look at their own acting. I guess this was all possible because Ha himself is an actor.”

Ha’s leadership was shown previously in “577 Project,” a 2012 documentary he organized that featured a group of actors walking from Seoul to Jeolla Province. While he did not direct that movie, Ha’s leadership suggested that he could have what it takes to helm a movie.

What makes “Fasten” interesting, though, is neither his name nor the humorous plot; rather, it’s how the ensemble of actors work together in play-like scenes that really captivates the audience. It is no easy feat trying to showcase 10 characters in one film with just one location. But Ha uses the confines of the airplane to really make his story work.

“Fasten Your Seatbelt” is a film that reminds us just why Ha is so loved. The uniqueness in his style and his way of looking at life is evident on screen, and is so fresh and fun, audiences will doubtlessly love it.