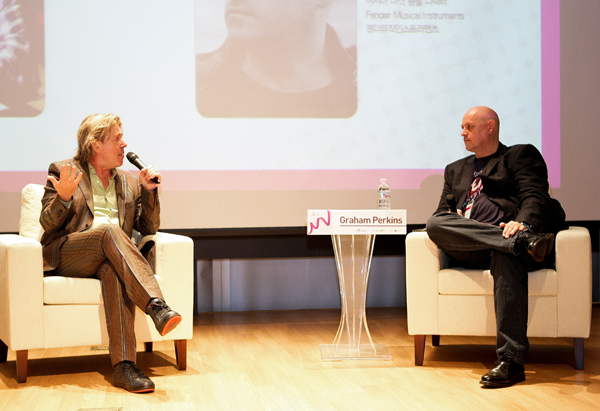 Steve Lillywhite, left, five-time Grammy Award-winning record producer for such artists as U2, The Killers and the Rolling Stones being interviewed yesterday by Graham Perkins, director of market development in Asia for Fender Musical Instruments. Provided by Kocca

Gone are the days when you had to stay up late listening to the radio to hear your favorite bands, or when you played your favorite cassette tape so much that it warped and broke. Gone, too, for most people are trips to record shops to discover and buy the latest hits. Now, all the music in the world is available digitally, in just a few clicks.

To discuss those fundamental changes to the music industry and what it means for the Korean music scene, top producers and executives from the world’s record business have come to Seoul for Mu:Con, a two-day music fair and exhibition.

Among the speakers are Seymour Stein, co-founder of Sire Records, the label that signed such pioneering artists as Madonna and the Pretenders, and Steve Lillywhite, the five-time Grammy Award-winning producer of U2 and the Rolling Stones.

Mu:Con kicked off yesterday with speeches and conferences at the GS XI Gallery in Seogyo-dong, western Seoul.

“Great music surpasses borders, religion and race,” said Hong Sang-pyo, president of the Korea Creative Contents Agency, the group that organized the event, as he kicked off the event. “It thrills everyone throughout the world and, in turn, is appreciated for its values. That is why, the theme for this year’s Seoul International Music Fair is ‘Beyond Borders, Beyond Genre, Beyond Music.’

“During the fair, we are going to have in-depth discussions on subjects such as the digital music services that have allowed borderless music distribution and the new platform YouTube. Moreover, we’ll listen to what’s happening in other countries, including Japan, China, Australia and Russia, from representatives from each of those countries.”

While many artists have criticized services like Deezer and Spotify, both Choi and Gosse said that people need to realize that we are in a “transformation period.”

“We are changing from one business model to another,” said Gosse. “Every change creates noise. It’s just a matter of time.”

“We’ve done all the research,” said Choi. “Streaming services don’t cannibalize downloads. What we did was bring those who download songs illegally through P2P sites back to legal environment. They are now paying, legal users. I would definitely say we are cannibalizing. But we are cannibalizing piracy.”

Kim Young-min, CEO of SM Entertainment, one of Korea’s largest music companies, delivered a speech about the transformation of today’s music culture.

“The existing music industry has been divided,” he said. “First, there were those who make music and then those who have the master rights, for instance, entertainment agencies like us in Korea or globally, the record labels. Also, there’s media that promotes and delivers music, such as radio and television. After listening to music from either one of those mediums, people went to record shops to purchase CDs or LPs. There were distinctive divisions in the music market. Now, existing media crosses over with the new media and lets people of all generations be exposed to music. When this crossover of existing media and the new media mixes together well, that’s when we have a massive explosion of great content.”

For Korea musicians, the showcase gave them an opportunity to impress the international experts, as well as get an invitation to one of the major international music fairs, such as MIDEM in France or South by Southwest in Austin, Texas.

For the showcases held yesterday at Mecenatpolis Mall and Sangsang Madang Live Hall in Hongdae, western Seoul, some of the teams that were chosen included electronic band Idiotape, rock group No Brain and Jambinai, a group that plays a fusion of post-rock and traditional music.

In addition, Korean hip-hop pioneer Drunken Tiger had a performance, together with his wife Yoon Mi-rae and longtime collaborate Bizzy, and boy group Exo also performed.

Tonight’s showcases will be held at Ellui and Beyond Museum in Gangnam, southern Seoul, starting at 7 p.m. They will feature artists Lim Kim, Rainbow, Verbal Jint and Chang Kiha and the Faces.

Korean modern rock band 3rd Line Butterfly will also play on stage at Ellui with Sieon, a singer-songwriter from Belgium.

Like yesterday, their performances will be aired live through YouTube worldwide. For more information about Mu:Con, visit www.mucon.kr.