Creativity in overdrive at Hyundai

Creativity in overdrive at Hyundai 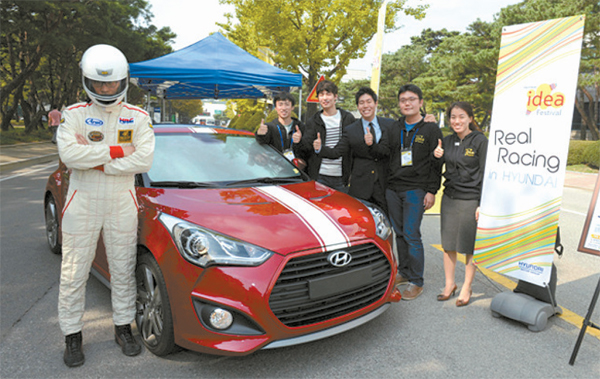 The “Need for Speed” team poses after winning the grand prize at Hyundai Motor Group’s “R&D Way Idea Festival” yesterday at the automaker’s Namyang Research Institute in Hwaseong, Gyeonggi. The team developed an in-vehicle entertainment system using a vehicle’s actual steering wheel and brakes to play racing games while car is not in motion. Provided by the company

After eating, more than 200 employees gathered in front of the main office building for the “2013 R&D Way Idea Festival,” a company contest for Hyundai’s R&D employees to show off their creative ideas.

Namyang Research Institute is known as the brain of the automaker’s technology, so people might think the place is like a fortress where security is tight and “scientific nerds” work. Yesterday it was more like a concert stage with employees as entertainers. With music and B-boy breakdancing, 10 final teams presented their mobility-related products in what resembled a high-tech version of “American Idol.”

The event, which is in its fourth year, has been an annual stage to present R&D employees’ creativity. This year it also focused on practicality with a theme of “Listening to Customers’ Wishes.”

Participants actually interviewed customers and held workshops to implement customers’ needs before planning their products, according to Hyundai.

Hyundai said it received ideas from 70 teams starting in April and 10 finalists were selected after two levels of screening. Qualifying groups received financial support and space to work on their projects for five months.

Presentations included a folding car that allows parking in small spaces, a self-powered shopping cart and a wearable robot to support the elderly while walking.

After nearly 30 minutes of presentations, which in some cases generated laughs when products didn’t operate as planned, the grand prize went to the “Need for Speed” team, which presented an in-vehicle game system called “Real Racing in Hyundai,” which transforms an automobile’s steering wheel, brakes, transmission and audio system into a game and the front mirror becoming a screen.

“The idea was to let customers experience the automobile not only as transportation, but also as an entertaining space,” said team leader Jin Dae-sung, who works in the research institute’s electronic control system unit. “It will be fun for customers when they are not driving or are in a situation where you have to wait someone.”

Jin said the team has applied to patent a software system that converts vehicles’ electronic control signals into game control signals, claiming it could be installed for 30,000 won ($27.95) if mass produced.

The six-member team, which received prize money of 7 million won, spent about six months on the project at a development cost of 4 million won.

Second place went to team EUM, which presented an attachable automatic wheel that can be used to move wheelchairs, strollers and bicycles. The team said it would cost 200,000 won for one wheel.

“I see some products that we can commercialize right away,” said Hyundai Motor Group Vice Chairman Yang Woong-chul, who is chief of R&D at Hyundai. “I feel that the creativity of Hyundai and Kia is developing more every year.” Hyundai said prize-winning products will be displayed at various events such as auto shows.