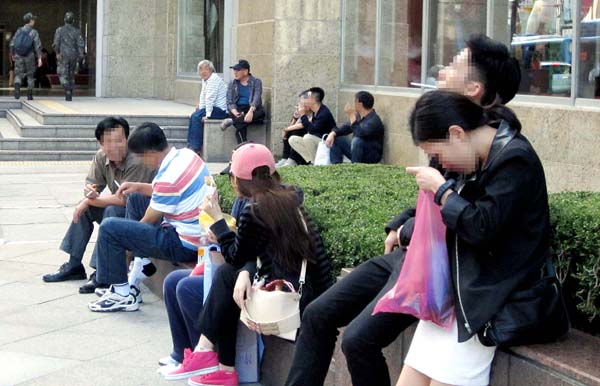 The front of Lotte Department Store in Sogong-dong, central Seoul, pictured here on Sept. 30. Chinese tourists are getting singled out for being the worst violators of Seoul’s anti-smoking laws in public places. By Lee Yoo-jeong

At the Lotte Department Store in central Seoul’s Sogong-dong, a 19-year-old part-time worker was using his eyes and nose to detect cigarette smoke. His job was to keep passers-by from smoking near the store.

Later, when he realized he was usually scolding Chinese tourists, he began to wonder if keeping an eye out for them rather than worrying about all potential smokers might make his job easier.

But dealing with 200 to 300 Chinese tourists a day was not easy.

Throngs of tourists, each with a shopping bag in hand, were smoking beside the flower beds in front of the department store on Sept. 30.

A sign written in Chinese, Korean and English was conspicuous a few steps away in broad daylight: “No Smoking.”

The worker said glumly that plucking out deeply embedded cigarette butts in the flower garden was another dreadful task - and sometimes dangerous if they were not fully extinguished.

There was a similar scene at the plaza in front of Doosan Tower in nearby Dongdaemun on Oct. 6. About 10 Chinese travel buses pulled up and parked nearby, and lines of tourists got off, gazed at the scene and pulled out cigarettes for a smoke break.

A smoking area was posted at the corner of the plaza, but the Korean tour guide told the reporter, “Dongdaemun is not a no-smoking area.”

While Chinese tourists are not the only people who ignore no-smoking signs, they are prominent among the scofflaws.

A municipal ordinance allows smoking outdoors in most places, but not in areas like bus stops, parks and playgrounds, and not in these special tourist zones.

A Democratic Party member of the city council, Choi Kang-seun, proposed an amendment last April to prohibit public smoking in all of Seoul’s special tourist zones.

“Foreigners usually visit Korea to shop and tour around the city,” said Choi. “Banning smoking will clean out the thick dark clouds, and eventually attract more travelers to the country.”

But with merchants jittery that the ban will drive tourists out of the shopping districts for good, the proposal to revise the law has been in gridlock for nearly half a year now.

“Chinese tourists heavily smoke in Myeong-dong District,” said the director of Myeong-dong Tourism Special District Association, Lee Dong-hee. “But still, I oppose strong anti-smoking policies because I do not want to cause them inconvenience.”

The city council is considering creating an exception that would allow smoking on streets narrower than 10-meters (33-feet) wide to allay those worries.