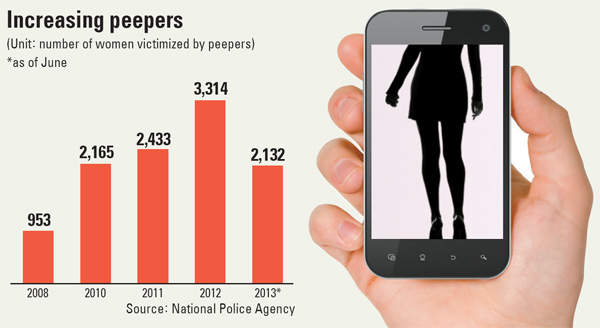 Mr. Lee is 31, works at an IT company, and has a 50-day-old daughter. Life was going pretty well for him, except for a rather nasty hobby he developed: Taking pictures up women’s skirts.

Around 6 p.m. on Sept. 24, Lee was pacing restlessly near an escalator at Seoul Station filled with rush hour commuters. Lee positioned his smartphone on top of his briefcase, held in place by the zipper, and started following a young woman in a purple mini skirt. He stood behind her on the escalator and swung his bag under her skirt. The smartphone was blinking, signaling that it was filming.

“What are you talking about?” Lee replied. “I didn’t film anything!”

Park found the clip of the woman’s purple skirt. He also found a picture of Lee’s infant daughter.

Lee sunk to his knees and begged for the policemen’s mercy. “I don’t know what got into me,” he said. “Please forgive me. I don’t want to be a shameful father for my daughter.”

From Sept. 24 to 27, the JoongAng Ilbo accompanied a subway police patrol unit specializing in capturing peepers using hidden cameras to get naughty pictures.

It’s a growing problem. According to data submitted by the National Police Agency to Representative You Dae-woon of the Democratic Party, 2,132 crimes associated with hidden cameras took place during the first half of this year, an average of 12 cases a day.

In 2008, 953 cases were reported, but the number went up to 3,314 last year. Adult sites on the Internet are dedicated to stills and video clips taken in subway cars, station escalators and public toilets.

From 2008 till June this year, the largest number of the crimes took place in Jung District, Seoul; 703 cases were reported in the area. Seoul Station, where Lee was apprehended last month, was a mecca for the crime. In 2011, and in June and August of last year, 85 cases were reported there. During the four-day stakeout with the police, the JoongAng Ilbo witnessed two apprehensions including Lee. According to the police, about three to four offenders a month are apprehended during their crimes at subway stations.

According to the police, the most popular locations for peepers are Seoul Station, Gangnam Station, Express Bus Terminal Station and Daerim Station. They all have long escalators, good lighting and they’re busy, with up to 200,000 daily commuters.

Aside from train and subway stations, peepers also like to take pictures in the windows of neighboring houses and apartment buildings, especially when the windows of bathrooms are left open during summer time. The fourth most common locale is in subway cars.

Under a special law about sex crimes, offenders who are found guilty of so-called “upskirt” photography face jail terms of up to five years and fines of up to 10 million won.

Some analysts say the punishments are too light to provide a disincentive to the behavior.

A 35-year-old truck driver was apprehended by the police in March while using a spy camera disguised as a USB drive. Police discovered that at least 544 women were victims of his crimes. He used his spy camera in subway stations, at bus stops and on the street. The Seoul Southern District Court convicted him last month and sentenced him to 10 months in prison.

A 31-year-old administrative worker at the National Assembly was apprehended by police in May for secretly filming a woman sitting on a toilet in a public restroom.

“But most offenders are given suspended sentences. The slap-on-the-wrist punishment is a problem.

“Their need to escape from a rigid social hierarchy is being expressed in abnormal sex crimes.”

She remembered that a former boyfriend had frequently asked if he could film their intimate moments, but she always refused. He did so secretly and made the video public.

Victims often don’t know they were filmed until the videos spread on the Internet or their former paramours threaten them to make the videos public.

According to the center, 26 victims have consulted it about the problem in the first half of this year, and 12 claimed they were secretly filmed.

The center screened major file-sharing sites from May to August and found 158 videos made with hidden cameras and deleted them.

Victims are usually reluctant to press charges against their former boyfriends. Of the 26 women who consulted Korean Womenlink, only two pressed charges.

Although using a hidden camera video for blackmail or extortion can be punished with up to three years in prison or a fine of up to 5 million won, victims are reluctant to go public and let their families and coworkers find out about their past.