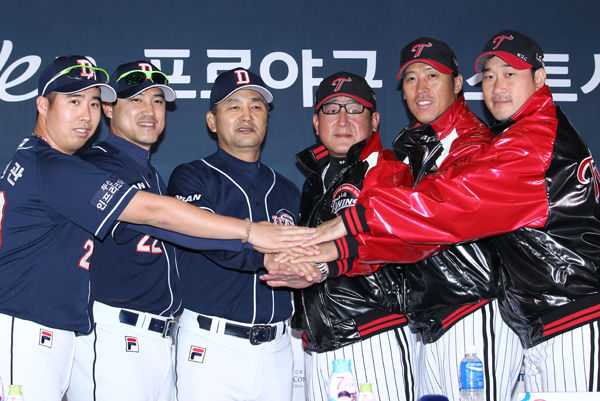 The Doosan Bears and the LG Twins will face off in the second round of the Korea Baseball Organization postseason. Game 1 of the best-of-five series is scheduled for 6 p.m. today at Jamsil Stadium in Seoul. By Lim Hyun-dong

After defeating the Nexen Heroes in the first round of the Korea Baseball Organization postseason, the Doosan Bears will take on their biggest rival, the LG Twins, in the second round. It is the first time in 13 years that the so-called Dugout Series will be held. Both teams use Jamsil Stadium as their home.

The Bears beat the Heroes, 8-5, in Game 5 on Monday at Mok-dong Baseball Stadium thanks to slugger Choi Jun-suk, who blasted a solo home run as a pinch-hitter in the top of the 13th inning. It was the Heroes’ first appearance in the postseason.

The biggest worry for the Bears is fatigue. In the best-of-five, first-round series, the Bears played three extra-inning games and already used their ace pitcher, Dustin Nippert, twice as a reliever. The Twins might be the happiest people in the first round as they watched the Bears’ pitchers throw too many pitches.

Ryu Jae-kuk will start Game 1 for the Twins, while No Kyung-eun will start for the Bears.

“Everyone knows that we are tired, but I will try my best to win Game 1 as it is the most important game of the series,” No said.

“I have good memories against the Bears,” Ryu said. “And our team’s ultimate goal is to win the Korean Series, not just beating the Bears.”

The key to the best-of-five second-round series will be the Bears’ hitting versus the Twins’ pitching.

The Bears led the league in hitting during the regular season with a team average of .289 and a slugging percentage of .420. They also had the most RBI (654), runs (699) and stolen bases (172). Their hitters struggled in the first two games of the first round, but bounced back by blasting six home runs from Game 3 to Game 5.

In the first round, outfielder Jung Soo-bin led the team’s offense with a .357 average (5 for 14) and infielders Lee Won-suk and Oh Jae-won each hit .333 with a home run. Slugger Choi played as a pinch-hitter and hit two home runs.

“Our players are tired as we just finished the five-game series,” Bears’ manager Kim Jin-wook said yesterday. “But since we finished the series with a dramatic victory, I think our players’ winning spirit will positively impact the games against the Twins. All I can do is just trust my players.”

The Twins’ biggest strength is pitching. Their team ERA in the regular season was 3.72, the best in the league. They once were shaky as their lefty starter Benjamin Jukich struggled, but right-hander Ryu, who once pitched for MLB’s Chicago Cubs, joined the team in May. Ryu earned 12 wins during the season while Radhames Liz and side-arm pitcher Woo Kyu-min each won 10 games.

With the addition of veteran reliever Jong Hyun-wook during the offseason, the Twins’ bullpen made 86 holds, the most in the league. Veteran lefty Bong Jung-keun also earned 38 saves, the second-most in the league behind Heroes’ closer Sohn Seung-rak, who notched a league-best 46.

The Twins are expecting a lot from three veteran hitters, all of them outfielders: Lee Byung-kyu, who won the batting title with a .348 average; Lee Jin-young, who hit .329; and Park Yong-taik, who hit .328. Their biggest worry is that they don’t have sluggers. The Twins hit 59 home runs in the regular season, while the Bears hit 95.

Twins manager Kim said he has put two catchers, Hyun Jae-yun and Yoon Yo-seob, on his 27-man roster, while excluding veteran lefty Jukich, who likely will not be coming back to the KBO next year after a poor season. In general, teams carry three catchers, but Kim instead included outfielder Yang Young-dong.

“The Bears are a good team,” LG Twins’ manager Kim said. “But I think we are ready to play as we have been preparing for this well.”