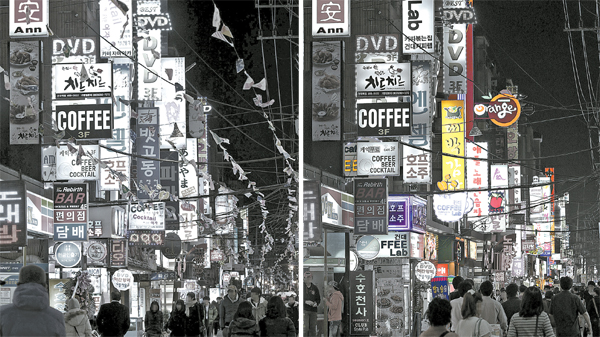 The same street in front of Konkuk University Station in Seoul is shown in photographs taken in December 2011, left, and last month. The signs in color on the right are ones of businesses that have changed over that period of time. By Park Jong-keun

On the seventh floor of Takashimaya Department Store in Shinjuku, Tokyo, the so-called one section stood out at Tokyu Hands multi-shop.

The area exhibits goods that are the result of ideas by ordinary people, not the finished products of conglomerates.

On Sept. 26, thousands of lunch box-related utensils - including devices that cut food into portions that fit the sections of a lunch box and products that make rice balls that resemble soccer balls - were on display.

Once products are on the shelves of this store, they have a path to enter retailers across the country.

“We are attracting about 200 ideas every month through the Internet,” said Kokubun Ichiro, who works at the shop.

Meanwhile, in Korea, 26-year-old college student Chung Ju-hyeong can hardly hold his anger. Omni Box, the side-dish delivery business he started in January, was the problem. The service delivered food from well-known side-dish stores in Gwangjang Market, Jongno District, central Seoul, and Chung’s sales had been 5 million won ($4,683) each month.

However, he had to close the business last month after being informed by the district office that he needed permission from food manufacturers and processors. Although Chung protested that stores of about 33 square meters (355 square feet) cannot legally receive permission, it was to no avail.

“Due to a regulation that does not reflect the nature of online businesses, I had to stop a business that had just started rolling,” said Chung, who is now trying to find a new job.

The theme of establishing a “start-up nation” is everywhere these days, with the government’s preeminent creative economy policy grabbing headlines as the key to economic growth and job creation.

However, the start-up environments of Korea and Japan are as different as the experience of Chung and the purpose of Tokyu Hands.

In Japan, good ideas fail or succeed based on market acceptance. In Korea, there are obstacles even for companies that perform well.

According to a JoongAng Ilbo survey of 1,000 persons age 19 and above nationwide from Sept. 9-10, 64.2 percent associate start-up companies with food services.

When asked if they have considered opening a business not related to food, 67.9 percent said they had not, even though eateries are also a big challenge with repeated openings and closings.

In the shopping area near Konkuk University Station, about half the store signs have changed from a year to 10 months ago.

“Koreans are suffering from start-up phobia as the number of retirees who open small food businesses and fail increases,” said Kim Jung-sik, dean of the College of Commerce and Economics at Yonsei University. “Rather than just opening any business, a policy that would allow start-up businesses with potential to thrive must be proposed.”

The problem is that opportunities to commercialize a business are limited for most start-ups in Korea. And most products end up collecting dust on lab desks.

Even if a start-up company develops a prototype by taking out huge loans, most prototypes fail to move beyond the development stage to be sold to consumers. There are few venues and platforms that can offer exposure to promising products.

Kato Keichi, 61, who built a successful business out of a short and smoothly bending ear pick through Tokyu Hands, said it was fortunate he could jump into a business by trusting something like Tokyu Hands.

In the United States and Europe, there are markets that buy and sell ideas, rather than products, as part of an investment trend away from borrowing money to start a business.

Another problem is Korea’s social and economic environment, where if someone fails once, he or she is stigmatized as somehow financially delinquent.

“We need to repair the system so people will be aware that opening a start-up is not difficult and create an environment where they can try again, even after failure,” said Yang Se-hoon, a senior research fellow at Korea Institute of Industrial Technology.