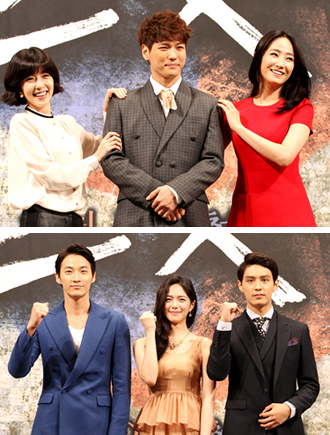 The cast of “Basketball” pose at a press conference to promote the series that takes place during the Japanese colonial era in Korea. Provided by tvN

On Monday, the cable channel tvN is launching “Basketball,” a new historical drama series about the team that improbably made it to the 1948 London Olympics.

It was the first time Korea competed in the Olympics as an independent nation and the only time as a single, undivided country.

The 24-episode series spans the Japanese colonial and independence eras, looking not just at the sport but at the trials and conflicts of that turbulent time - with plenty of love and tears along the way.

At the heart of “Basketball” is, unsurprisingly, a love triangle. It is the story of San (Do Ji-han) and Chi-ho (Jeong Dong-hyun), two members of the basketball team who both fall in love with Shin-young (Lee Elijah).

But there are wrinkles. Shin-young is the daughter of a pro-Japanese businessman, San yearns to move upward in social status and Chi-ho is the best basketball player of the era.

The director, Kwak Jeong-hwan, who also directed the KBS series “The Slave Hunters” in 2010, is famous for his tense plots and dynamic images.

Rather rare for a Korean drama, however, Kwak chose relatively unknown or rookie actors as the leads. But Kwak defended his unusual casting choices.

“When choosing an actor, the important factor for me is whether they match the character,” said Kwak. “As true beginners in society, these actors are a perfect match for their characters.”

Kwak also said that it was easier for him to direct new actors because they are like a blank slate.

“Although this might be my first time being on screen, I studied acting in school,” said Lee.

“And with the support of the veteran actors and the guidance of the director Kwak, I was able to act more easily and well.”

Due to the subject matter, another crucial factor was the actors’ athletic prowess. But getting that right might have been trickier than the director anticipated.

“I actually lied to the director and told him that I can play basketball,” said Jeong. “But the truth is, I have played basketball less than five times in my life.”

At first, the basketball skills of the male actors worried the director.

However, with hard work and constant practice, the actors now all say that they enjoy playing basketball.

The drama does feature one actor who is no unknown.