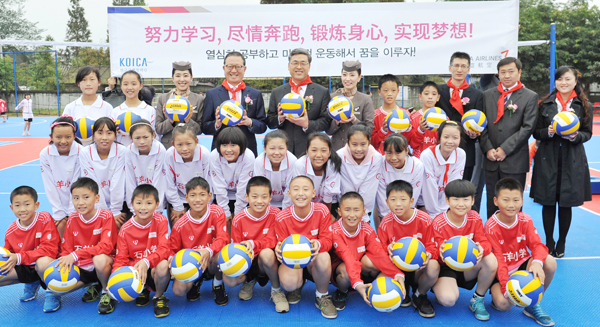 Asiana Airlines President and CEO Yoon Young-doo, fourth from left in third row, and Shiyang Primary School students in Dujiangyan, Chengdu, China, pose yesterday on a volleyball court donated by the company. Provided by the company

The affiliate of Kumho Asiana Group said it built a volleyball court and donated sports equipment, a piano and books to upgrade the school’s educational environment. Asiana is also conducting a vocational program for students who wish to become flight attendants.

“We are proud to fulfill our responsibility as a global air carrier and invest in the future of China by supporting the students of Chengdu,” said Yoon. “We will put our best effort forward to lift the status of Korea and make society better by consistently performing social contributions.”

“Beautiful Classroom” has been one of the most recognizable social contribution projects for Asiana, which has worked with the Korea International Cooperation Agency (Koica) since March 2012.