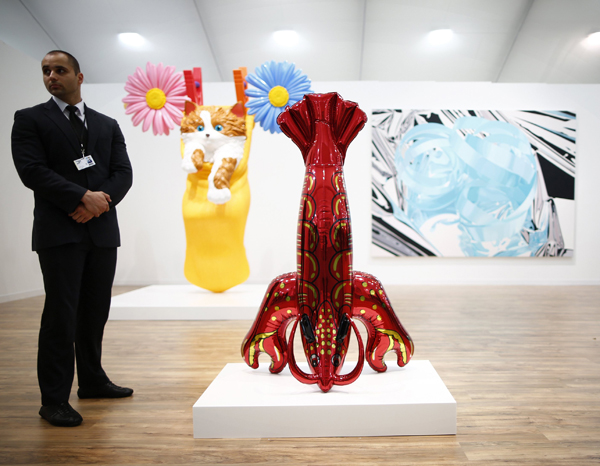 Security guards stand next to Jeff Koons’s (left to right) “Cat on a Clothesline (Yellow)”, “Lobster” and “Ribbon”, at the Gagosian Gallery’s stand at the Frieze Art Fair in central London on Wednesday. [REUTERS/NEWS1]

LONDON - The Frieze Art Fair got smaller in 2013, but industry insiders said that would make it no less important for international players who flock to London every October to see cutting-edge contemporary works.

The world’s largest art fair combines works by household names and those from lesser known artists in a giant white marquee in Regent’s Park. This year it features 152 galleries and runs from October 17-20.

Five works from leading American pop artist Jeff Koons displayed at the Gagosian Gallery, each likely to carry an estimate in the tens of millions of dollars, are only steps away from Finnish newcomer Pilvi Takala’s “Drive With Care” video installation priced at around $11,000.

“For me it’s important to get the really young emerging artists spot on and bring through really great younger galleries as well as encouraging the really established .?.?. experienced galleries,” Frieze cofounder Amanda Sharp told Reuters on Wednesday at the fair’s bustling VIP preview.

Sharp, who cofounded the fair with fellow director Matthew Slotover 11 years ago, said that after last year’s expansion into New York and the introduction of a concurrent Frieze Masters in London, they decided to cut the numbers.

Frieze is still the largest and best known of a growing number of similar events that have launched in the city on the back of its success.

It consolidated its position last year with the launch of Frieze Masters, a concurrent fair for historical art only a short walk away, which has 130 exhibitors.

Leading figures in contemporary art said fierce competition, and a smaller Frieze, have not diluted its key role for gallerists, artists and heads of the art world’s major institutions looking to sell, buy and promote their work.

Strolling through a crowd of glossy-haired women in expensive outfits, shipping tycoons and wealthy family scions was Nicholas Serota, director of Britain’s Tate galleries and one of the art world’s most powerful figures.

He told Reuters that Frieze, combined with its old masters offshoot, provided an unrivaled spotlight on the art market.

“Many of the galleries show some of their best work and it’s an opportunity to see some things you don’t know about.”

At the center of Frieze London sits the Gagosian, showing only works from Koons, of which his mirror-polished stainless steel sculpture “Sacred Heart (Blue/Magenta)” (1994-07) is the star attraction.

A similar work to the giant blue, heart-shaped sculpture that looks like a foil-wrapped chocolate sold for $33 million last year.

The fair is organized into three main sections. Works from better known artists like Koons, Julian Schnabel and Christopher Wool, displayed by the most powerful galleries, dominate the centre of the main section.

There are two specialist sections. “Focus” is dedicated to galleries up to 10 years old presenting projects specifically conceived for Frieze, and “Frame,” which was created for young galleries showing solo artist presentations.

Galleries representing more than 30 countries catch the eye with works both bizarre and beautiful.

At the Stephen Friedman gallery, American artist Jennifer Rubell’s “Portrait of the Artist” is a giant white fiberglass sculpture made of the artist when she was eight months pregnant, and which allows people to crawl into its open womb. Reuters