Foreigners a resource for local entrepreneurs

Foreigners a resource for local entrepreneurs 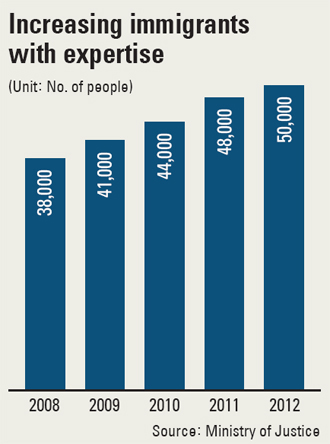 “Rather than Silicon Valley, which is saturated with start-ups, I was more attracted to the dynamic Korean market,” said 23-year-old Micha Mazaheri, who is from France.

Almost every day, Mazaheri goes to D.Camp, the start-up community that provides space for working, cooperation, networking and incubation in Yeoksam-dong, southern Seoul.

He met a Korean co-worker at an event sponsored by the start-up support center of D.Camp, which was founded by the Banks Foundation for Young Entrepreneurs.

Mazaheri, who graduated from the Ecole Pour l’Informatique et les Techniques Avancees (Epita), a graduate school of computer science and advanced technology in France, first tried to establish a start-up in Silicon Valley for two years before coming to Korea in March.

“Korea, where a 4G network is established nationwide and even those who are in their 50s and older are using smartphones, is a great market for me to start my business,” he said.
Mazaheri is developing a cloud app that connects those with hobbies like cooking and dancing to experts in those areas.

“After succeeding with Koreans, who are state-of-the-art information technology consumers, I plan to expand the business to the global market,” he said.

With the country’s advanced IT infrastructure attracting experts like Mazaheri and other foreign workers, the standard of establishing a start-up with only domestic employees is changing.

There are also cases of businesses that start in the domestic market and expand overseas with the help of their foreign employees.

G&G Commerce is a start-up that operates an online wholesale shopping mall, and four of its 40 employees are from Southeast Asia. They have made a significant contribution to the company, developing its locally focused Domeggook online shopping mall into a global Web site where consumers from outside Korea can place orders in English, Chinese, Japanese, Hindi and Russian.

In some cases, start-up companies that often suffer from manpower shortages are able to turn to foreign workers who come to Korea hoping to pitch their business ideas.

Sentilraja Thiyagarajan, 29, studied computer science in college and worked in India before coming to Korea. “Working abroad is a dream of every Indian engineer,” he said.

In addition to educated and skilled workers coming to Korea, there are foreigners who come to study here.
Chandra Shekhar Dhir, 33, from India, is director of the audio research team at Enswers, a local multimedia recognition technology company.

The team is developing a program that searches audio rather than written documents.

Established by a Korea Advanced Institute of Science and Technology (Kaist) start-up in 2007, Enswers hired foreigners the following year. Of its 72 employees, a total of 14 are from India, the United States and Uzbekistan.

Dhir joined the company after receiving a Ph.D. in brain science at Kaist. “At this company people are not evaluated by their nationalities, but by their ideas and results,” said Dhir. “As the company’s culture is so open, I believe it was much better that I came to this company than to a large corporation such as Samsung and LG.”

Don Larissa, 31, of Uzbekistan, married a Korean man and started living in Gochang, North Jeolla, in 2006. With her fluency in Russian, Korean and English, she has been working as a staff assistant at EC21 under the Korea International Trade Association helping small and midsize export companies since March.

She even clinched a contract worth $136,000 by helping an exporter of traditional tea.

“Even though there was a growing demand in Russia, it was not easy to find a way to export. Thanks to Larissa, who is familiar with the local circumstances, we could initiate the exports,” said Ahn Jin-hoon, CEO of Rich Green, a building insulation company.

Nguyen Ngoc Phuong of Vietnam came to Korea in 1999 and worked as a welder for a shipping company before returning to Vietnam in 2005.
In 2007, he started a furniture business with a Korean partner that today has annual sales of $3 million.

“We divided management roles, with the Korean CEO taking charge of sales and me taking care of administrative tasks in Vietnam,” he said.

Experts in entrepreneurship say it is important for start-ups to think beyond borders.

“Don’t be trapped in the domestic market. Start-ups must become multinational companies,” said Levi Shapiro, a senior organizer of Ad and Social Tech Summit, Israel’s largest IT conference, who visited Korea in July.

“Start-ups should also break away from nationality. Only in the global entrepreneurship ecosystem will start-ups be able to reach for bigger markets,” said Kim Young-min, senior fellow at LG Economic Research Institute.

“There are many start-up founders who try to succeed in the domestic market before expanding overseas. However, if they utilize foreign workers effectively, they can find success in the global market from the beginning,” said Kim Hak-min, research fellow at Korea Institute of Materials Science.